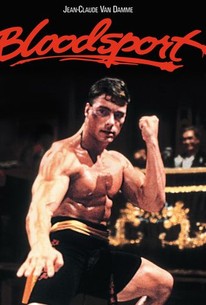 Critics Consensus: This is where it all began for the Muscles from Brussels, but beyond Van Damme's athleticism, Bloodsport is a cliched, virtually plotless exercise in action movie recycling.

Critic Consensus: This is where it all began for the Muscles from Brussels, but beyond Van Damme's athleticism, Bloodsport is a cliched, virtually plotless exercise in action movie recycling.

U.S. soldier Frank Dux (Jean-Claude Van Damme) has come to Hong Kong to be accepted into the Kumite, a highly secret and extremely violent martial-arts competition. While trying to gain access into the underground world of clandestine fighters, he also has to avoid military officers who consider him to be AWOL. After enduring a difficult training and beginning a romance with journalist Janice Kent (Leah Ayres), Frank is given the opportunity to fight. But can he survive?

Ronnie Li
as Fighter
View All

The contest format is hopelessly repetitive and inert, the characters would seem underdeveloped in a comic book, and the restricted setting ensures that the action will never develop any real scale or velocity.

Hacking through the jungle of cliche and reservoir of bad acting in Bloodsport are some pretty exciting matches.

A well-plucked turkey, humourless and plagued by a script full of stilted mumbo-jumbo.

Sometimes, all one needs to watch is a movie like "Bloodsport"; simple, yes, but extremely satisfying. [Full review in Spanish]

Bloodsport has zero cinematic merits and is an apology for violence. [Full Review in Spanish]

A prime time hour of hits, a lot of blood, a lot of morbid. [Full Review in Spanish]

Bloodsport is a film that will appeal to a specialized audience to be sure. Laced with humor and an often light and flippantly written script, Bloodsport is a sleeper with a real wake-up punch.

Gripping kick-box bouts and an eye-watering training routine made this a crunching calling card from the Belgian bruiser.

Van Damme may have been an excellent martial artist (he had fought as an amateur and professionally for several years before entering the movies), but he was no actor.

Bloodsport is strictly for martial arts buffs; little is offered here in the way of plot, dialog, or acting.

A campy Van Damne actioner fit for lovers of B films.

Scary to think that a movie this bad could make anyone a star.

Fun and entertaining martial arts film, Bloodsport is not a perfect film, but is definitely an entertaining ride if you can get past the tongue in cheek moments and so-so acting. The reason that the film works so well is becauset of the great fight scenes that make up the film. Although the film relies on a decent script, the fights are great, and fun to watch, and make the film much better. The direction is effective enough to generate a film that is thrilling and exciting, and if you can forget that it's a corny action film with laughable dialogue, you'll most likely enjoy it. I didn't that this was a great film, and I felt it could have been much better, but it was entertaining. This is the first Jean-Claude Van Damme film that I've seen, and he is very good in his role despite the silliness of it all. If you enjoy martial arts films, pick this one up. The film's strength lies in the fight scenes and not the acting or plot. Expect an entertaining flick that is quite mindless and fun, but don't expect something great either. Bloodsport has plenty of flaws, which I already pointed out. Expect Van Damme doing lots of splits, which is awesome and pretty painful to say the least. The fights are wicked and that's all this film is, fights, fights more fights and even more fights. Bloodsport doesn't try to be great and memorable martial arts flick like Bruce Lee's short, but legendary filmography, but it has spirit and delivers awesome action despite its imperfections and lack of great story.

"Bloodsport," even though it is based upon a real martial arts fighter, feels extremely corny and sloppily put together. The dialogue feels like it was written and directed by a young teenager who was given a professional camera, along with some big name hollywood actors who really do not seem interested in their own characters. Usually the action in a film like this would be the deciding factor between enjoyment or utter awfulness, and honestly, this film fails at that as well. The action is very poorly edited and there is practically no signs of practised choreography here. I could not keep myself from laughing during this entire film, not because of intended comedy, but because the characters were very unintertesting, the story is extremely generic, the cinematography captures the worst angles during the fight sequences, and the overall film suffers. Seeing as it is based on an actual person, you would think that the filmmakers would have put a but more devotion into the film and hired a better actor than Van Damme, but what can you do. The film was made, and it really sucks. Still, throughout the film you can find some enjoyment during the fight and chase sequences.

I, like most film fans, can appreciate the films of Kubrick, Goddard, Pabst, Bergman, and other auteurs. With patience, time, and access to a well-vetted Wikipedia page, one can slowly begin to peel back layer by layer the many different meanings encompassed in the very best of cinema. However, it takes a certain kind of man to truly take on headfirst a film as profound, devastatingly honest, and important as Newt Arnold's Bloodsport. Arnold not only understands the human condition better than any filmmaker I have ever seen, but he also knows how to trim the fat and get to the very heart of what keeps people coming back to the movies over and over again. All of this, and much much more, is on display here in Bloodsport. Arnold utilizes slow motion to great effect here as he knows that watching a fibula break just isn't the same when witnessed in real time. Also, the raw energy of the immensely talented cast only adds greater depth to the already riveting story that touches on, but is not limited to: alienation, addiction, love, and above all, pain. While I am sure there are countless metaphors buried beneath all of the abdominal blows and roundhouse kicks, I couldn't even begin to touch on them here. Hell, I don't even know if a doctoral dissertation could begin to unpack all of the symbolism Arnold gives us in a single frame. It's best to leave that to the experts, should there ever exist someone willing to take on such heady subject matter. Hitchcock once said "For me, cinema is not a slice of life, but a piece of cake." I can only assume that Hitch got his hands on an early print of Bloodsport when he said this as I can not imagine any other film being more deserving of your time than this blood-soaked masterpiece.

Van Dammes finest hour, this is a great martial arts fest with brilliant scenes and some stunning Hong Kong scenary. The fights are great, alittle dated now but still cool with nice fake blood splashing around and over the top moves. It lifts your spirits as Van Damme, as predicted, beats the final opponent, avenges his buddy and wins the tournament. The other fighters are a great line up too, real collection of styles and looks to show its a world tournament, this is how 'Street Fighter' should have been, in fact it could be SF2 easily. Good training scenes, nice soundtrack and its based on reality which is kinda new for Jean Claude.