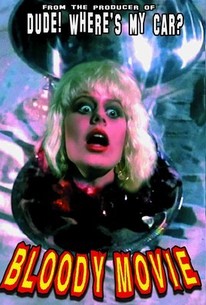 This chilling horror flick takes place at the deserted Hollywood Hills estate of late movie star Lance Hayward (John Ireland). Every person who enters the house meets a gruesome death at the hands of a bizarre murderer dressed up as the dead actor's most well-known movie characters. A slew of B-list celebrities, such as Alan Hale Jr., Aldo Ray, Dan Haggerty and Michelle Bauer, make cameo appearances as the killer's unfortunate victims.

There are no critic reviews yet for Bloody Movie. Keep checking Rotten Tomatoes for updates!

There are no featured audience reviews yet. Click the link below to see what others say about Bloody Movie!