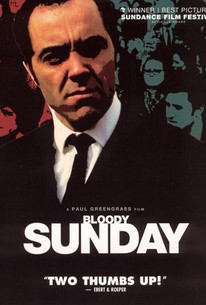 A depiction of the events of the infamous bloody massacre which took place Sunday on January 30, 1972 when 27 civilians were gunned down by the British Army in the streets of Northern Ireland. The story revolves around two young men who are caught up in the crossfire. One is an idealistic civil rights leader, and the other a teenage Catholic boy. Witness testimony contradicts the official findings of the government-sponsored investigation committee, which, in the first few months following the tragedy, cleared the British Army of any wrongdoing. The events fueled a 25-year cycle of violence between Britain and elements of Ireland, North and South.

James Scott
as Officer at Barrier 12

Graham Harrison
as Officer at Barrier 14

Get Ready for Another Dose of "National Treasure"
Critical Consensus: "United 93" Is Best-Reviewed Drama of 2006
How "United 93" Came From "Bourne" and "Watchmen"

Greengrass sacrifices character and plot to a chilling impressionistic stylization.

Watching director Paul Greengrass's explosive Bloody Sunday, you have to remind yourself at moments that you're not looking at a documentary.

Greengrass has deliberately chosen to provoke an emotional rather than intellectual response with his film -- but sometimes provocation is much preferred to the British media's maintenance of the status quo.

Comparisons with The Battle of Algiers are not inappropriate.

[An] outstanding dramatization of real-life emergencies, with a nerve-jangling, documentary-type immediacy.

Although originally produced for British television in 2002, Paul Greengrass's vivid depiction of a violent turning point in the so-called Troubles in Northern Ireland was released in the U.S. in theaters.

Time has offered the Troubles perspective, investigation and pop-culture outlets (U2′s "Sunday Bloody Sunday"). But Paul Greengrass's film spoke to how reason meant absolutely nothing when rage reigned on either side of the line.

It's rare that a dramatic film convincingly captures the chaotic, confusing, fast-paced nature of real life -- much less real life in a crisis.

Intense and difficult, but rewarding.

Interesting account of what happened on this tragic day. Not sure which side is telling the truth, but it is quite clear that things got way out of control. This movie was filmed in reality, shaky camera style...not my favorite. However, it was a decent attempt at telling this unfortunate event in history.

Felt it a bit lengthy, but otherwise incredible. Of course I was never aware of such historical incident. But that's no news, is it? However, I found it a bit exaggerated when Ivan compares the incident to the Amritsar Massacre (aka Jallianwala Bagh Massacre, which also happened to be a Sunday). Worth a watch, but could have been edited better.

Greengrass is just plain and simply, the man. He has the Midas touch in which everything he touches, turns to gold. In this gripping retelling of the events in 1972, Greengrass takes memories so wrought with emotion, and presents them in a way that seems not only fresh, but also fair. While he could have easily made a film vilifying the British for their actions, he takes time to give them reason, and shows the rage that was boiling up on both sides. As soon as you spend too much time with one side, the picture fades to black and we are taken back to the other side of the battle. On top of being a stylistic choice, it also helps keep the audience objective. He by no means defends the British, but he does the best he can to make the audience understand the calamity. As for the calamity itself, it is incredibly well done and unbelievably intense. I have never felt like I was in the middle of such a violent conflict before and this film just made me plunge right in the eye of the storm. The acting here is top notch and there are some pretty stunning long takes that help to really put you right in the heart of the chaos. All in all a very fine film. A gripping and very fine film indeed.

The true story of one of the most pivotal and shameful events during the troubles of Northern Ireland when the occupying British army opened fire on unarmed civil rights protesters in 1972. Paul (The Bourne Identity) Greengrass' representation of this horrific event in Irish history is an uncompromising, unflinching and honest portrayal of something the British government would no doubt wish to forget and only relatively recently admitted responsibility for. The documentary style approach avoids soap opera style melodrama, unnecessary sub plots and sentimentality to show a truthful and unbiased picture of what happened that day and it's all the more powerful for it. James Nesbitt shines amongst a cast that are all totally believable as both sides of the story are shown in equal measure, both the victims of the atrocity and the unprepared military whose lack of training for such situations and indifferent command led to a huge over reaction and tragedy. It's a deeply shocking story and a timely reminder of what it must be like for any population who has to live their lives in fear.