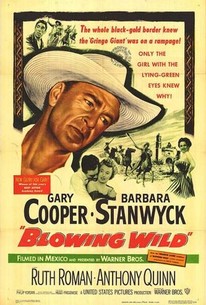 With Gary Cooper and Barbara Stanwyck in the cast, Blowing Wild was a guaranteed hit even before the cameras began turning. Cooper plays oil wildcatter Jeff Dawson, who does his best to bring in a gusher in Mexico despite continual bandit raids. Dawson asks for help from his ex-employer Ward Conway (Anthony Quinn), but Conway, now married to Dawson's ex-lover Marina (Barbara Stanwyck) refuses, fearing that his wife will want to renew her romance with the other man. The predatory Marina, still in love with Dawson, murders her husband, admits her crime to Jeff, and pleads to be taken back to America with him. A timely bandit attack solves everyone's problems in ultra-violent fashion. Blowing Wild was filmed through the facilities of Mexico City's Churubusco Studios. ~ Hal Erickson, Rovi

There are no critic reviews yet for Blowing Wild. Keep checking Rotten Tomatoes for updates!

There are no featured reviews for Blowing Wild at this time.