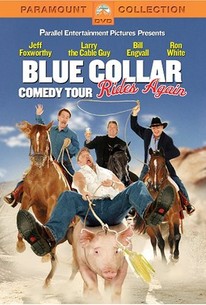 The redneck quartet from the original Blue Collar Comedy Tour re-groups for another night of laughs, with (mostly) fresh material performed for an upbeat audience. A funny, clubby preface on a tour bus establishes a tone of lowbrow camaraderie among Jeff Foxworthy, Larry the Cable Guy, Ron White, and Bill Engvall, but once on stage, the differences between each comic's style is considerable. Amiable Engvall kicks things off with gentle gibes: "Men are basic: eating, sleeping, sex. I can do all those in my truck." The decadent air of Ron White darkens the show: "If I'd known the difference between 'antidote' and 'anecdote,' my friend would still be alive today." Foxworthy, the likable Everyman, comments on his wife's hypochondria: "Honey, you do not have testicular cancer." Finally, Larry the Cable Guy lowers the bar on sick-hick humor but does score occasionally: "I got a vasectomy at Sears. When I get excited, the garage door opens." --Tom Keogh

There are no critic reviews yet for Blue Collar Comedy Tour Rides Again. Keep checking Rotten Tomatoes for updates!

Probably the best of the Blue Collar movies.

Ron White is a badass. and thats all youre gonna get outta me!