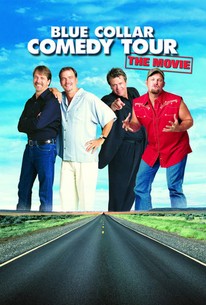 This performance video is a collection of highlights from standup comedy routines made during a tour across America during the summer of 2002. Directed by C.B. Harding (The Osbournes), The Blue Collar Comedy Tour Movie also incorporates behind-the-scenes segments with the individual comedians. Along the same lines as The Original Kings of Comedy, but marketed toward a radically different crowd, this comedy concert headlines the top names in so-called "redneck" humor: Jeff Foxworthy, Bill Engvall, Ron White, and Larry the Cable Guy. This film arrives after the four performers spent two years on the road and released the best-selling comedy record Blue Collar Comedy Tour Live.

The underlying secret of the four comedians is the way they find humor in daily life, and in their families.

A well-crafted concert film that should delight fans and attract new ones.

This ensemble stand-up movie does have its moments.

Although the comedy is, to say the least, less edgy than that of The Original Kings of Comedy, there are some solid laughs among the crowd-pleasing bathroom gags.

The jokes are witty and universal enough for everyone.

They couch their humor in a genuinely warm aura, proudly stripped of any edge or hipness.

Fast-paced and friendly enough to satisfy.

Four 'good ole boys' that all make me laugh - that doesn't mean I'm a redneck, but I will admit to knowing some personally.

When these four fellows deliver their best material, the picture delivers, too.

Unlikely to draw new fans but destined to please followers who couldn't catch the live act.

You don't need to own a pickup truck or know how to use the word 'aorta' in a sentence ... in order to appreciate the amiable humor.

Should have been a one and done like a crunchwrap supreme, as much humor as you could get from this comedic format.