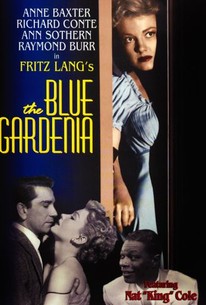 A woman finds herself accused of murdering the stranger she went home with in this film noir. Knowing only that the killer, who beat the man to death with a poker, is a woman, a reporter posts an open plea for the murderess to turn herself in. Though innocent of killing the man, the woman decides to respond to the ad, calling herself a friend of the accused. She and the reporter meet each other at the Blue Gardenia several times and gradually fall in love. Believing her to be guilty, the reporter urges her to confess. But then the real killer shows up and all ends happily for the lovers.

Nat 'King' Cole
as Himself

Robert Shayne
as Doctor
View All

Critic Reviews for The Blue Gardenia

The weakness in this case clearly lies in a script by Charles Hoffman, which is hackneyed and tedious from beginning to end.

The somewhat wilted plot manages to take on an unaccustomed bloom in Fritz Lang's direction and the acting of an adept cast.

A stock story and handling keep The Blue Gardenia from being anything more than a regulation mystery melodrama.

As a piece of film noir, I find quite compelling its crime chronicle of jealousy, amnesia and murder. [Full review in Spanish]

This is one of Fritz Lang's weaker efforts in film noir, although his great visual style is evident in every scene.

Fritz Lang on a shoestring, photographing Los Angeles with Buñuelian speed and strangeness

Made the same year as The Big Heat, Fritz Lang's lesser-known The Blue Gardenia plays just as well.

Never has a chance to bloom.

Audience Reviews for The Blue Gardenia

Another good thriller from Fritz Lang. It's really exciting and dramatic, and the actors are good. I liked this movie.

Have you ever discovered that someone was planning a surprise party for you so you went along with it, acting surprised even though you really weren't? And then you discovered that, instead of the expected fifty guests, only three or four of your friends showed up? And then only one of them brought a gift? And then that gift turned out to be something you already have? If so then you already know what it's like to watch The Blue Gardenia.

Really disappointing noir. The only entertaining thing was Raymond Burr.