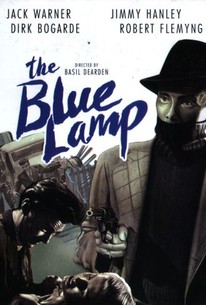 The Blue Lamp was an immensely popular British crime film (and the winner of the BFA Award), concentrating on interrelated episodes in the lives of several London policemen. Jack Warner heads the cast as George Dixon, a veteran "bobby" who is murdered by scuzzy small-time criminals Dirk Bogarde and Patrick Doonan. Rookie cop Jimmy Hanley, who'd looked upon Warner as a father figure, is instrumental in bringing the crooks to justice. The semi-documentary style of The Blue Lamp could not help but have been an influence on Jack Webb's Dragnet. Jack Warner proved so popular in the character of George Dixon that he was brought back from the dead to star in the BBC TV series Dixon of Dock Green.

Tessie O'Shea
as Herself (singer)

Critic Reviews for The Blue Lamp

A warmly human, unpretentious yarn about the murder of an affable London policeman. The many amusing incidents are part and parcel of the story, not lugged in for "comic relief."

The latest production from Ealing Studios unavoidably challenges comparison with Hollywood in style and verisimilitude; it must be said that comparison on all major counts is unfavourable.

Audience Reviews for The Blue Lamp

Police officers pursue a band of thieves who kill one of their own. This film starts about thirty minutes too early; it's over a third of exposition. What is more, there is clear thesis to the film as it basically states in the first minute that it lauds the efforts of British police, and the film doesn't blanch at showing their bravery, resourcefulness, and teamwork. The officers are not flawed characters, nor are they really characters with any dimension. The bad guys are bad, nothing exceptional. And the plot unfolds rather predictably. Overall, I think this film might have been innovative in 1950, paving the way for The French Connection and other crime dramas, but today it doesn't hold as much sway.