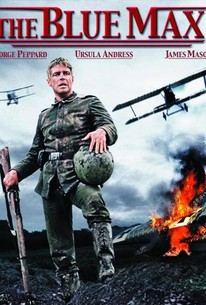 Based on a novel by Jack D. Hunter, The Blue Max is a World War I aviation drama, told from the German point of view. Low-born infantryman George Peppard becomes a pilot, almost deliberately stepping on the sensibilities of his aristocratic comrades in the process. A national hero, Peppard wins the Blue Max, the highest award that can be bestowed upon an aviator. His fame is exploited by general James Mason, who tolerates Peppard's affair with Mason's wife Ursula Andress. The canny Mason knows that, eventually, Peppard will be expendable, and a "heroic" death can be arranged. ~ Hal Erickson, Rovi

Ray Browne
as Pilot
View All

Critic Reviews for The Blue Max

There are no critic reviews yet for The Blue Max. Keep checking Rotten Tomatoes for updates!

Audience Reviews for The Blue Max

There are no featured audience reviews yet. Click the link below to see what others say about The Blue Max!