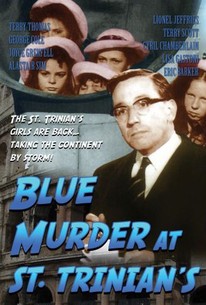 Writer/artist Roland Searle's diabolical "belles" of St. Trinian's Girls School return in this raucous British comedy. Because the girls cannot behave themselves, their headmistress (Alastair Sim in drag!) has been thrown in jail, and the school is surrounded by police and army troops. The students escape their durance vile by winning an all-expense-paid trip to Europe (by cheating, of course). While laying waste to the Continent (with Terry-Thomas driving the bus), the girls are enmeshed in a diamond theft instigated by the father (George Cole) of one of the students. The film ends with an elongated water polo game, played with the ladies' usual sense of sportsmanship and fair play. In the 1950s and 1960s, the "St. Trinians" series was as popular a British movie attraction as the "Carry On" films--but unlike "Carry On", they don't play quite as well with American audiences. ~ Hal Erickson, Rovi

There are no critic reviews yet for Blue Murder at St. Trinian's. Keep checking Rotten Tomatoes for updates!

There are no featured reviews for Blue Murder at St. Trinian's at this time.