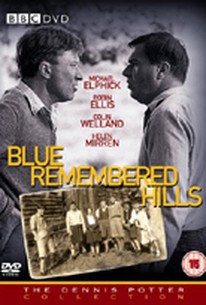 The title derives from A.E. Housman's 1896 poem: "Into my heart an air that kills; From yon far country blows; What are those blue remembered hills . . ." On a sunny, summer afternoon in 1943, seven children (two girls, five boys) play in the hills, fields, and forests of bucolic England. They encounter no adults, and their activities veer in spontaneous, unpredictable directions, with small cruelties and and games echoing the distant war. In scripting this for the BBC, Dennis Potter decided to cast adult actors in the roles of the children as "a magnifying glass to show what it's like to be a child." This concept sliced through "misplaced nostalgia" to illustrate how "childhood is not transparent with innocence." One's perspective on this wavers between seeing the seven as children and/or seeing them as adults, but both viewpoints converge when the two girls (Helen Mirren, Janine Duvitski) decide to "play house," presenting a startling, unforgettable scene in which adults are acting as children who are pretending to be adults. ~ Bhob Stewart, Rovi

There are no critic reviews yet for Blue Remembered Hills. Keep checking Rotten Tomatoes for updates!

There are no featured reviews for Blue Remembered Hills at this time.