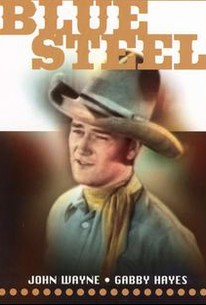 John Wayne once again goes undercover to catch a wanted outlaw in this average entry in his 1934-1935 Western series for Monogram Pictures. Wayne plays John Carruthers, a U.S. marshal, and his quarry is the Polka Dot Bandit, aka Danti (Yakima Canutt), who has taken off with a 4,000-dollar pay roll. As John soon learns, Danti is in the employ of Malgrove (Edward Peil Sr.), a supposedly upstanding citizen who is secretly trying to starve the good people of Yucca City. Unbeknownst to the townsfolk, a valuable ore runs right through the area and Malgrove is plotting to buy the land on the cheap. Blue Steel was produced at Hollywood's General Service Studios with exteriors filmed at Big Pine, CA.

A routine B Western.

Made in 1934 here is a standard action oater from those glory days in Hollywood, with plenty of rootin', tootin' shooting and plenty of riding across open prairies surrounded by mountainous plateaus to save the day. Gabby Hayes admirably seconds the action.

Just your regular run-of-the-mill western. If it wasn't for John Wayne, nobody would throw the skull of a drunken rat after this one.

One of John Wayne's best Western detective film. Not much of the twist and suspense but the acting is still classic. Wayne portrait as a young man following a thief while being suspected and followed by a local Sheriff. Later they joined up to lasso ...(read more)up all the bad guys and save the day.