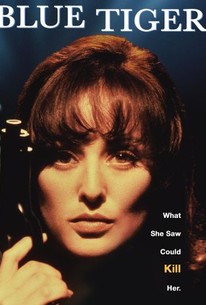 In this classy action-drama, ill-fated lovers are trapped between yakuzas as they battle for a Southern California business operation. When Gena Hayes lost her son to a Yakuza hitman, she suffered a complete mental breakdown. Only after she remembers that her son's killer sported the tattoo of a blue tiger does she begin to recover. She approaches a tattoo artist with her information, but he doesn't know to whom the tiger tattoo could belong. He does however give her the same tattoo. Gena gets a job as a cocktail waitress in a bar frequented by the Japanese mobsters and finds the killer's brother Ryo, Ishibashi. She also finds and falls for the very sexy Nakamura, who secretly desires to escape and find a love. Gena and Nakamura become lovers. She doesn't know that he was her son's killer.

Dan Bradley
as Turk
View All

There are no critic reviews yet for Blue Tiger. Keep checking Rotten Tomatoes for updates!

There are no featured reviews for Blue Tiger at this time.