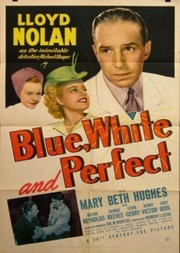 Super Reviewer
Bruce B
March 27, 2013
The Michael Shayne series was a great gig for Lloyd Nolan as he didn't get to play many leads. "Blue, White, and Perfect" from 1942 is a fun entry into the series, and for us boomers, another chance to see George Reeves without his Superman cape. The film also features Helene Reynolds and Mary Beth Hughes.

In this one, Shayne takes a job as a riveter, at first to watch for sabotage, but after a robbery of industrial diamonds, to ferret out the criminal. Actually the job is a great cover as his fiancée, Merle, is pressuring him to get out of the detective business.

The trail leads to Hawaii. Since this film was released in January of 1942, it looks like it was filmed before Pearl Harbor, so the placement of the story in Hawaii is interesting, plus the fact that we seem to be on the trail of not Japanese, but Nazis. In order to get money for passage on the ship, Shayne convinces Merle to make a $1000 deposit on a ranch. Clever if low! On the ship, he meets Juan Arturo O'Hara (Reeves) and an old client, Helen Shaw, who now owns a dress shop in Hawaii. It gets pretty dicey from there as someone tries to kill Shayne, by not only shooting, but drowning! Director Herbert Leeds keeps the action going at a snappy pace. Highly entertaining, with a lively performance by Nolan, and a charming one by Reeves (Superman), whose career never regained its momentum after his war service.
4 Stars 1-16-13

Alex S
½ October 6, 2011
Michael Shayne's got a lot of sleuthing to do to find some diamonds. And he does it in true Michael Shayne style!

Nick F
November 29, 2009
Its Michael Shayne versus Nazis in this above average entry in the detective series. The diamond smuggling plot is well played out and gives Shayne an actual mystery with some consequence. Nolan's street-wise charm helps ease the movie over some rather wacky plot turns. Nolan's comedic turns are genuinely funny this time around, especially the phone call to his fiancee "from the plant". Despite the movie's low-budget production values, the film offers many a scenery change, from San Fransisco to a cruise to Honolulu which adds to a very fast pace for the action onscreen. Although hardly echoing the hard-boiled edge of the Brett Halliday novels, this film won't disappoint those looking for an alternative to the Thin Man series.

R.C. K
½ January 19, 2009
I've now seen all four of the currently released Michael Shayne pictures from the 1940s, and I'm almost completely out of steam to review them. There's not a lot of differentiation because they're b-roll pictures that acted as companions to bigger budgeted main features.

Shayne (Lloyd Nolan once again) is now confronted with a girlfriend, Merle Garland (Mary Beth Hughes, returning to the series as a different character), who wishes him to leave the detective business so that she will marry him. Shayne agrees, asking a friend to set him up in the Thomas Aircraft factory, where he masquerades as a riveter, but in fact aims to prevent sabotage (since it's wartime and all). He stumbles across a diamond smuggling plot which leads him to the Daisy Bell dress company, where he meets with Rudolph Hagerman (Henry Victor) as "Colonel Henry Breckenridge Lee, Jr.," a southern salesman. The perp who put him on the trail of the diamonds in the first place happens to catch him, though, so he's left trying to follow the diamonds on a ship, where he meets up with former flame Helen Shaw (Helene Reynolds) and playboy-type Juan Arturo O'Hara (George "Superman" Reeves). Naturally the diamond thieves aim to protect their quarry, but O'Hara seems to know more than he's letting on as well.

Much like Sleepers West, I was more entertained by this film than the other two. Nolan continues to shine in his role as Shayne, especially his amusing turn as the disguised Southerner, where he even goes so far as to carry himself differently and avoids really harping on his dialect choice. The best part was doubtless his interaction with the Tobys, who own a store right next to the Daisy Bell company. Mr. (Frank Orth) and Mrs. Toby (Mae Marsh) are left stunned and staring as Shayne wanders in and out of their store, attempting to keep himself below the radar in his investigations--or in attempting to continue his deception of Merle regarding his occupation. Reeves is interesting to see long before his Superman days, and interesting in his role as a whole, with a similarly subdued approach to an accent he doesn't naturally possess. Neither is of course perfectly accurate at it, but it's refreshingly low-key, especially for a film that not a lot of star power or money was dumped into.
Page 1 of 1