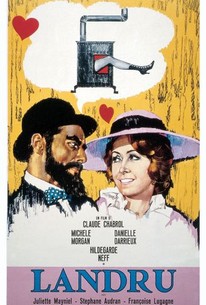 This dark and macabre film provides several touches of humor despite the grisly plot. Landru (Charles Denner) is the notorious Bluebeard, who answers the adds of lonely ladies in the personal column of the newspaper. His reputation of a good family man sharply contrasts his activities of a murderer of women for monetary gain. Landru lures the women to a country estate after sweet talking them and sends them to the great beyond well before their time. He kills eleven women before the sister of one of the victims puts the finger on him. The noose tightens around his neck after being grabbed by the long arm of the law.

Bluebeard came from a period in Chabrol's filmography that finds him moving away from the naturalism of his early New Wave films.

Chabrol's study is a jaundiced waltz, a poisoned heart under a perfumed surface, a rich Ealing vein mined Gallically

There are no featured reviews for Bluebeard (Landru) at this time.