A Blueprint for Murder1953 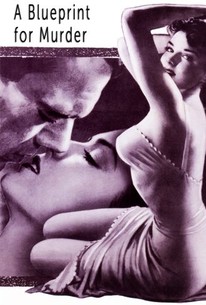 A Blueprint for Murder Photos

Joseph Cotten stars in A Blueprint for Murder as Whitney Cameron, a man who harbors a deep and abiding affection for his pretty sister-in-law Lynne Cameron (Jean Peters). When one of Lynne's stepchildren dies, the autopsy indicates that the child was poisoned. Despite his feelings for Lynne, Whitney can't help but feel that she was responsible for the child's death--and that she intends to go on killing until she becomes sole heir of her late husband's estate. The "moment of truth" occurs during a climactic ocean voyage which consumes nearly a third of the film. A Blueprint for Murder was written and directed by Andrew L. Stone, whose legendary insistence upon "realism" at all costs was such that it's a wonder he didn't persuade Peters to commit a real murder. ~ Hal Erickson, Rovi

Critic Reviews for A Blueprint for Murder

This is a well-acted thriller.

Audience Reviews for A Blueprint for Murder

No bad, not great semi noir. What really hurts it is the blown oppurtunity of the ending.

This was a great movie. A Black & White Suspense film, someone is poisoning the kids. But old Cam (Joseph Cotton) knows who the guilty person is. About 3/4 into the movie I am wondering if I picked the right person. In the bitter end and I do mean bitter end the truth surfaces, but I think a sequel could have easily been made for this one, as the finger could have pointed to Cam very easy. Add this one to the collection, 4 stars for sure

A Blueprint for Murder Quotes