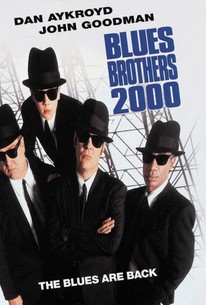 Critics Consensus: Braving onward without the late John Belushi, Blues Brothers 2000 gets the band back together with a spirited soundtrack, but a mission that's far less divine.

Critics Consensus: Braving onward without the late John Belushi, Blues Brothers 2000 gets the band back together with a spirited soundtrack, but a mission that's far less divine.

Critic Consensus: Braving onward without the late John Belushi, Blues Brothers 2000 gets the band back together with a spirited soundtrack, but a mission that's far less divine.

After their first adventure, Elwood was given a prison sentence of 18 years. Upon release he learns that his former partner Jake has died. Determined to get the band back together, he picks up 10-year-old Buster and Mack McTeer. They travel across the country to Louisiana for a battle of the bands.

Willie "Too Big" Hall
as Himself

Donald "Duck" Dunn
as Himself

Junior Wells
as Himself

Lonnie Brooks
as Himself

Jennifer Irwin
as Nun No. 1

Michael Bondar
as Russian Thug No. 1

Slavko Hochevar
as Russian Thug No. 2

Wally High
as Russian Thug No. 3

Richard Kruk
as Russian Thug No. 4

John Lyons
as Russian Thug No. 5

Patrick Patterson
as Sheriff
View All

Now a sequel has arrived, Blues Brothers 2000, offering more of the same. And less.

The sequel offers more of the same, only less.

This isn't a sequel, it's a remake.

Once upon a time, it was funny.

If one gag doesn't do it for you, surely the next one will.

If viewed at this late date, it provides mostly nostalgia for the pairing of the lovable soulmates.

It goes without saying that Blues Brothers 2000 doesn't carry the original's significance and R-rated personality, yet select treats remain, while the soundtrack wails triumphantly.

There must be a niche audience for this travesty -- probably among teenagers whose hearing and mental faculties are impaired.

Another time, another planet.

Buy the soundtrack and rent the one with Belushi.

Sequel to the awesome Blues Brothers, manages to recycle aspects of the original and deliver something quite decent, but never great. I enjoyed the film, but it lacked the special quality that made the original so memorable and fun. This sequel suffers the same fate of all other sequels, it's a movie that tries to outdo its predecessor, but relies too much on the original for its material. This follow up has its moments, but it's nothing memorable or truly worthwhile. This is the type of movie that is worth seeing only once, and it's a movie that is a bit too predictable as well. Blues Brothers 2000 is a film that could have been great, but it lacks anything to really make it stand out. Fans of the original will be disappointed in this film, and since the fact that Belushi died two years after the release of the original, and he was a key ingredient in the success of the original, his absence make this one not that entertaining. However, there are a few enjoyable moments, but it's another one of those sequels that fails to really build upon the original, and it's a film that since its predecessor is so iconic, it's truly hard to beat. With this follow up, they did what they could do best in trying to make something work, but throughout the film, you'll constantly feel that something's missing, and due to the fact that it uses old ideas, there are more weak points that strong point. I don't think it's an awful film, but it is a movie that doesn't make an impression either. Enjoyable at time, tedious at times, Blues Brothers 2000 just feels tiresome, and if you're expecting a great movie like the original, you'll be disappoint, and you're only going to get a mildly decent affair that could have been better as well.

[img]http://images.rottentomatoes.com/images/user/icons/icon13.gif[/img] Born only out of the success of the original and plummeting into a pile of other dissapointing sequels released before the turn of the century, Blues Brothers 2000 fails to charm the second time around. John Goodman is a perfectly fine replacement for John Belushi as Dan Aykroyd's partner but the simple fact of the matter is, no one really wanted this film. Anyway, would it really have been right to make the film after Belushi's death, despite the fact it's been made in his dedication? It's not as bad as it could have been but as I expected, I didn't like it as much as the original.

Facts about "Blues Brothers 2000". *First: The Blues Brothers, is a terrific film, that looks perfect in his way. A unforgatable cult film which will be in the minds of a lots of fans. * Second: Make a sequel is not gonna be better or remmember the first or at least make a homage to Belushi and Calloway. * Third: They make a sequel. * Fourth: Is suchs, have some nice scenes and good music... but don't compensate. * Fifth: Is rotten.

I love the first film, its one of my top ten favorite films. The second - well, as we all know, we don't have John Belushi with us anymore, which is one strike right there. The filmmakers made the good choices of John Goodman and Joe Morton as backup singers. Had they stopped there, the film would have been much better. Instead, a kid was thrown into the mix. An orphan, of course. Awwww. Elwood Blues is supposed to act as mentor for the kid (Buster), but forgets to return Buster to the orphanage, getting half the cops in the country and several mean orphanage workers on his tail. Now, the whole point of the first Blues Brothers film is that these guys can't stay out of trouble. The character of Elwood, with or without Brother Jake, is going to get himself in it up to his eyeballs. The whole story about Elwood being chased for kidnapping is ludicrous. Elwood is going to get in trouble for one thing or another. It didn't have to be kidnapping. Thus, we end up listening to a prepubescent kid squalling the lines of a damned good song, one that was belted out by three fine singers (Aykroyd, Goodman, and Morton), thus ruining the whole effect. It's no wonder that the Blues Brothers lost the Battle of the Bands - I'd have booed them offstage for bringing a kid into the mix. There's an cloying, aren't-we-cute gushiness about Buster and his little Blues Brothers outfit that almost gags me. I loved the musical numbers and all the guest artists - and what an impressive group they are! - so I can't understand why the filmmakers would drag down the storyline by introducing a kid, and throwing in all the clichés associated with a small child interacting with adults. The kid is just needless baggage. He's (supposedly, though I see no evidence of it) a good singer. He gives a pep talk at the crucial time. He's easy to bond with. It just doesn't work. This of course had a hard to getting to screen with studio " notes" such Buster being one of them and the other wanting a pg-13 rating which to me totally took the life out of the film and made it to lite.. I do really blame Landis or Aykroyd for the faults with this film. I've heard time and time again about how the dealing with a studio who has no clue about the audience for a film can screw it up. Also not the worst sequel ever made despite what some will tell you. Not even close. See Highlander 2 if you wanna see the worst sequel ever made. In the end I like the film will watch it for the music and for Elwood's highly inventive method of parallel parking