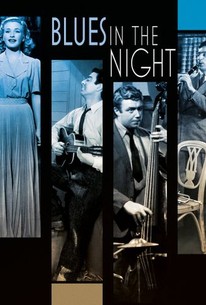 Blues in the Night Photos

The big-band mystique of the 1940s was explored by Blues in the Night. Future directors Richard Whorf and Elia Kazan star as, respectively, a neurotic band-leader and a carefree clarinettist. Their jazz band travels from one small-time gig to another, always hoping for their big break but always denied fame thanks to their own personal demons. Priscilla Lane and Betty Field portray (again respectively) the good and bad girls in the musicians' lives. While we're never treated to a full rendition of the title song, Blues in the Night scores with its melodramatic set pieces, including a gutsy climactic murder/suicide sequence involving Betty Field and escaped convict Lloyd Nolan.

William Gillespie
as Singer
View All

Critic Reviews for Blues in the Night

A supposedly authentic jazz story about struggling itinerant jazz musicians that is far from authentic.

Audience Reviews for Blues in the Night

Atmospheric music drama, not a musical. What more can you say about a movie where Priscilla Lane's character is named Character.

Blues in the Night Quotes