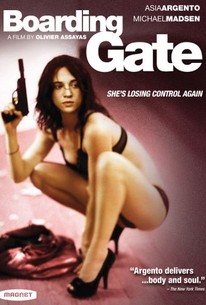 Critics Consensus: Boarding Gate has little substance beneath its faux-thriller surface, and marks a step down from director Olivier Assayas' usual work.

Critics Consensus: Boarding Gate has little substance beneath its faux-thriller surface, and marks a step down from director Olivier Assayas' usual work.

Critic Consensus: Boarding Gate has little substance beneath its faux-thriller surface, and marks a step down from director Olivier Assayas' usual work.

From director Olivier Assayas comes this erotic thriller starring Asia Argento as Sandra, a former prostitute, and Michael Madsen as Miles, her onetime pimp-turned-high-powered businessman. Brought back together after a separation, Sandra and Miles are reunited when Sandra returns to Paris after an extended absence. Despite the fact that neither of the two former lovers are the same people they were back in the day, their kinky sexual relationship is nonetheless rekindled. It seems that some time long ago, financial promises were made before some misdeed drove the pair apart. Meanwhile, Sandra has made it her mission to open a Beijing nightclub, and Miles is about to sell off his business to Singapore interests. Miles couldn't care less about Sandra's dreams of owning a nightclub, but now that his divorce has been finalized he's eager to resume their steamy relationship. Tempted by Miles' money but financially comfortable thanks to her work with an import company run by shady couple Lester (Carl Ng) and Sue Wang (Kelly Lin), Sandra secretly pulls down some extra income by moving drugs through the married couple's highly profitable company. Before long, sexual intrigue and a botched drug deal combine to complicate matters for all involved. Boarding Gate screened at the 2007 Cannes Film Festival. ~ Matthew Tobey, Rovi

Régis Vidal
as DJ at Vega

Distills genre tropes (and their consequent pleasures) to their lean, potent essence.

The main thing interesting about Boarding Gate is the spectacle of Assayas' effort -- the attitude and the international backdrop -- not the story itself.

Like just about everything in Boarding Gate, the finale suggests that its creators have been watching too many other movies with similar premises and payoffs.

The plot may be murky, but actress Asia Argento is a clear and commanding force throughout.

This hypnotic, angular thriller about sex, murder, betrayal and money takes you on a feverish journey from nowhere to somewhere.

A ridiculous poseur thriller that seems to be made up of the slow moments from Hong Kong action films and Euro-flashy stuff like Run Lola Run.

"Boarding Gate" is mired in secondhand, vaguely political notions about globalization and unwilling to really let itself go to extremes.

In the spirit of the financial and creative constraints of B-movies, Assayas has taken his latest film [and] filled it with bare characters moving briskly across limited landscapes, and gotten a skimmed, thinned result of considerable kinetic emptiness.

The movie itself is pathetic.

When all the nonsense of Boarding Gate ends, only Asia remains in memory. She can light up the best and the worst of 'em.

As for Argento ... yeah, she's got something. Now we'd like to see her in a movie that makes sense.

At firt i didnt wanna see this, i wasnt interested in this at all and i should have stuck to that because this movie is extremely shit! i gave it 1 and half stars just because there was a shooting and murders that made it a little bit interesting but the rest shit! The sotryline is shit and so shit that even at the end your wondering what the hell that movie is about ! not worth the time ir effect crap!!

Wow I am seriously wondering why exactly I watched this movie. I guess this is the problem of having Netflix instance access. Anything with an actor I like ends up in my queue. I saw Michael Madsen and was like oh yeah lets watch that...I feel dirty first off. The first movie I remember of Asia was Fast and Furious, then Land of the Dead. This is a FAR FAR fall from those. Will have a hard time looking at Mr Blond again. Really not sure how a person should feel after watching this. It starts with Madsen and a gun at a range. I'm like this has potential to be violent and good times. Guess I should have read what it was going to be about first. Then comes Asia as some kind of...whore/ex-whore breaking it off with Madsen. Next thing you know there is a drug deal gone bad and she's back talking Madsen supposedly ending it with him but sure enough her actions don't back up her stance. She talks a good game, being all hard and wanting to let him go but she is like a hooker that just can't say no when someone gets aggressive with her. It's like a really twisted perverse love story only I don't think there is any love there. Watching the story unfold I'm at a loss for words. There is a twist I didn't see coming to where she starts a new life. it's kind of like one of those dark flicks like Get Carter remake with Stallone or 8 mm. It's real dark and leaves you feeling seriously dirty. There is also the simple fact that at times there is like chinese or French spoken and unfortunately there are no subtitles. This has the habit of leaving one feeling lost sometimes. This isn't to say that the dialogue is all that convincing or moving. It merely seems to be lines strung together to, I guess help the plot along. It's not that they characters don't look natural saying the lines or the things they do, it's just the way they deliver them feel like there is no heart behind them and someone is coaching them. I find it seriously hard to get invested in this film as I don't really feel any pull or meaning behind it. I guess this was suppose to be something to show off Asia's acting chops and it feels almost too natural for her to carry on the way she does. Something to be said for an actor/actress to act like they aren't acting at all but I think it adds to the "cheap" feel of the characters. Almost feel like she really is a whore but then again who in Hollywood isn't?

Meandering thriller with much style but little substance. Argento may have a smouldering beauty but her acting leaves much to be desired and Madsen is unconvincing.

[font=Garamond][size=3]"Boarding Gate," the new English-language film from French writer/director [b]Olivier Assayas[/b], has a terribly bland title, but it's not a bland film. It'[/size][/font][font=Garamond][size=3]s in no way a masterpiece, but it's an interesting story centering on a set of criminals struggling to make ends meet and striving to navigate the emotional intrigues that develop between them.[/size][/font] [img]http://blogs.nypost.com/movies/movies/boarding.jpg[/img] [font=Garamond][size=3]The film also has the astonishing actress [b]Asia Argento[/b], daughter of legendary horror schlockmeister, Dario Argento. This woman must be seen to be believed. I have been reading about her for a few years now, but this was my first opportunity to see her in a leading role. [u]Argento is a revelation[/u]. She has an other-worldly screen charisma and primal, instinctual intelligence that reminds me of a young Marlon Brando. She also has the effortless sensual allure of Marilyn Monroe and the punk fuck-you confidence and beyond-gender transcendence of Patti Smith circa 1976.. [/size][/font] [font=Garamond][size=3]Her performance here is sensual, but it's nowhere near as vulgar as the poster above would suggest. There are a couple of sex scenes, but the film is much more about the heart strings than the loins. I think it's a bit gross that the distributors chose to market the film using a labia shot. [/size][/font] [font=Garamond][size=3]This shot really is from the film (although the gun was -- revoltingly -- airbrushed in), and it's true that Argento is known for her extreme on-screen openness with her body. It's also true that the French have become known for on-screen pornography and general radicalism in artistic films, a movement of which Assayas is to some degree a part. So this marketing ploy wasn't coming out of left field. But "Boarding Gate" is not that radical actually and it is in no way pornographic, so the poster is misleading. It mischaracterizes the film. But if a labia shot gets more people into the theaters, then I'm fine with it. It's tough to market art-house films in America, so I don't begrudge the distributor a little tawdry pandering.[/size][/font] [font=Garamond][size=3]Argento plays a woman in Paris having two affairs: one with an American (played by [b]Michael Madsen[/b], in a bit of stunt-casting a la Quentin Tarantino, who is surely a hero of Assayas's) and the other with a Chinese man for whom she's working. The early part of the film focuses on the unusual tug-of-war involved in her relationship with the American. (I love you. I hate you. I don't love you anymore, but I'm attracted to you. No, I really love you. No, I hate you!) There is also a sado-masochistic element to the relationship, with one sex scene involving strangulation. Then there's a radical twist in the plot, which I won't give away, and the second half centers on the relationship with the Chinese man -- and with the Chinese man's wife. [/size][/font] [font=Garamond][size=3]In addition to relationships, the criminal activity of these characters is explored. Gradually details of this are revealed, and there are a handful of double crosses that are unsettling. Much of the dramatic tension stems from the uncertainty as to who is double-crossing whom, which only gradually is clarified for the audience. Argento's character never really learns who has double-crossed her, and for a long time the viewer is just as uncertain. The film very successfully captures this frightening feeling of not knowing whom to trust. It also succeeds at conveying the danger that Argento's character is in. There is a chase sequence through the crowded streets of Hong Kong that is chilling. One really feels mortal danger in the air.[/size][/font] [font=Garamond][size=3]Ultimately though, "Boarding Gate" is more interested in the romantic yearnings and jealousies that keep passing between this band of engaging miscreants. I was moderately interested in this aspect of the story. But Assayas didn't succeed at making me care that deeply. I think I would have cared more if all the actors were at Argento's level, or anywhere near it. This was not the case. Madsen was pretty laughable, looking like his character had been shipped in from a bad American TV show. [/size][/font] [font=Garamond][size=3]The Chinese actors were also two-dimensional, and [b]Kim Gordon[/b] (from the art-rock band Sonic Youth -- yet another bit of stunt-casting) appears in a cameo that is horrendous. Gordon has great stage presence when performing music, but acting is most definitely not her forte. I'm quite confident we won't be seeing Gordon in any more movies.[/size][/font]