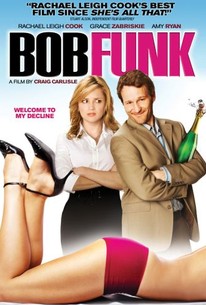 A divorced, alcoholic salesman attempts to pull his life together in time to get his old job back and avoid becoming the laughing stock of the company in this midlife crisis comedy starring Michael Leydon Campbell, Rachael Leigh Cook, and Amy Ryan. As if a failing marriage and a serious bout with the bottle aren't troublesome enough, socially challenged salesman Bob Funk (Leydon Campbell) realizes that his life has really hit the skids when he's fired by his own mother (Grace Zabriskie). Now, in order to rejoin the sales force, Bob will have to take stock of his life and meet his problems head on. When Bob finds himself falling for the very woman his mother has hired in as his replacement, however, the road to recovery starts to get a little bumpy. ~ Jason Buchanan, Rovi

Nadia Dajani
as Jean
View All

[Bob Funk] insists that we find charm in its protagonist's most odious behavior.

If you can get through the tedious first half of Bob Funk, there's actually a decent little character study waiting on the other side.

Carlisle's film is designed with a certain suburban flatness that at times perfectly reflects Bob's inner deadness, though not his periodic spurts of sarcastic rage.

Movies -- especially inconsequential, earnest comedies like Bob Funk -- about how people achieved their sobriety " are as fascinating as listening to people recount the plot of their dreams.

The dry, witty first half is far more interesting, even if it's ultimately more amusing than funny.

Bob Funk is terrifically cast and performed, with some good lines. Shame the story and character development are so cliché and banal.

Much like its titular character, the film itself has some serious growing up to do and needs a strong dose of warmth and charisma.

A showcase for writer/director Craig Carlisle, Bob Funk is a broad, functional contrivance that has its jaunty moments, but doesn't work as a whole.

There are no featured audience reviews yet. Click the link below to see what others say about Bob Funk!