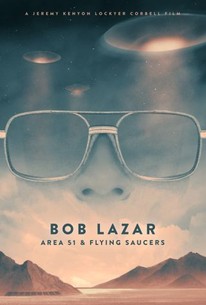 Area 51, flying saucers from another world - and the program to create a fierce technology. Bob Lazar remains the singular most famous and controversial name in the world of UFOs. The reason you know about Area 51 is because Lazar came forward and told you about it. His disclosures have turned his life upside-down and he has tried to stay out of the spotlight. For this reason, he has never let any filmmaker into the private world of his daily life - that is - until now. Corbell's film explores Lazar's claims through the lens of thirty years - providing rare and never before revealed footage - guaranteed to alter the landscape of the debate.

Even worse, Corbell never digs directly into Lazar's claims. His failure to locate any sort of authenticity proves to be the film's worst feature, of many.

At its core Bob Lazar: Area 51 & Flying Saucers has an interesting narrative, although it refuses to recognize it.

Corbell's desire to "weaponize" his audience is undercut by his indifference toward trying to convince anyone watching who wasn't a true believer already.

The movie is well edited and moves at a brisk pace. But the narration by Mickey Rourke is poorly handled and brings the film down a bit.

There are no featured audience reviews yet. Click the link below to see what others say about Bob Lazar: Area 51 & Flying Saucers!