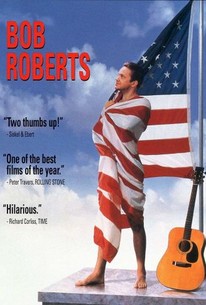 Critics Consensus: Behind and in front of the camera, Tim Robbins delivers a landslide comedic victory with Bob Roberts -- a shrewdly crackling lampoon of modern politics.

Critics Consensus: Behind and in front of the camera, Tim Robbins delivers a landslide comedic victory with Bob Roberts -- a shrewdly crackling lampoon of modern politics.

Critic Consensus: Behind and in front of the camera, Tim Robbins delivers a landslide comedic victory with Bob Roberts -- a shrewdly crackling lampoon of modern politics.

In the tradition of This Is Spinal Tap, producer/ director/ star Tim Robbins' Bob Roberts is a satire disguised as a documentary. Robbins plays the titular Roberts, a wealthy, well-connected young man running for a senatorial seat in Pennsylvania. On the surface, Roberts is an ingratiating glad-hander, a sincere believer in the restoration of such intangibles as national pride, family values, etc. But the longer Roberts is followed about by documentary filmmaker Brian Murray, the more we become aware that the candidate is a textbook case of cynicism and contempt. Only Giancarlo Esposito, a reporter for an underground newspaper, is willing to dig beneath Roberts' veneer--a habit that leads to the film's ironic conclusion. Several well-known actors make cameo appearances as TV commentators, notably Tim Robbins' longtime partner Susan Sarandon. Bob Roberts started out as a Tim Robbins-directed short subject for the TV series Saturday Night Live, then was expanded into a $4 million feature. ~ Hal Erickson, Rovi

Brent Hinkley
as Bif the Patriot

Anita Gillette
as The Mayor's Wife

Like a relentlessly charismatic political candidate offering the moon, stars and a viable health-care plan, ''Bob Roberts'' promises much but ultimately fails to deliver.

Whether we find Our Bob appealing or anathema, it is a measure of Robbins' exceptional success that no one can doubt how seductive a candidate like this would be in an election near you.

After a summer in Hollywood fantasyland, at last we have an American movie that rattles our cage-and pokes a sharp spear into the body politic. Now that's entertainment.

The first 30 minutes of Bob Roberts are the best, with the conceit still fresh, but the last are unbelievable: where did all the fun go?

Bob Roberts is a shrewdly drawn portrait of the unsettling intersection of entertainment, business, and politics.

This nose-thumbing mock documentary is so prescient, so astonishingly up-to-the-minute, it creates the eerie effect of having been ripped from tomorrow's headlines.

"Bob Roberts" is a bold and often hilarious movie that cares enough about politics to take actual stands on real issues.

While he resists imitating or stealing from "Citizen Kane," Robbins proves himself a filmmaker whose first film shows something of the genius and daring of the young Orson Welles.

A political horror story for teens and adults.

Robbins's satire is savvy and complex enough to send mixed signals to the viewers about politics and pop culture; both Democrats and Republicans may find supporting evidence for their arguments in his picture.

Gets a bit too peachy at times, but overall the political commentary and satire play well (arguably even more so now than in '92).

Bob Roberts is a hilarious political satire mockumentary, relating the events of a fictional senatorial campaign. Despite coming out in 1992, many of the issues it brings up are surprisingly timely (occurring in the midst of the Gulf War), it has a lot of interesting (if not unfamiliar) things to say on our political system. The film's politics are driven by liberal-cliches, but it's done in a smart way that mocks the overall system rather than one party, and does so with some poignant thoughts from the great Gore Vidal (who also stars in the film). By far the best things about the film is the unbelievable cast filled with cameos from the top actors of the 90s (James Spader, John Cusack, etc), but also a number of laugh out loud lines such as: "Don't smoke crack. It's a ghetto drug." "I could use a strong finisher myself sometimes "

I hate these boring political dramas that try to be slightly satirical, as if that's going to entertain people. Politics is so boring, and this movie doesn't do anything (except maybe adding Rickman as eye candy) to make the audience interested in it. It's not one of the worst movies out there, but I really didn't care for it.

Still one of the finest political movies to come out of the U.S. Considering that Robbins has produced some stinkers since then, perhaps he ought to have stopped with the genre at this film.