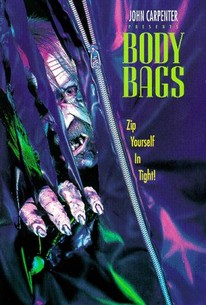 John Carpenter and Tobe Hooper directed this trio of shockers hosted by a small town coroner.

None of the three playlets breaks barriers, and the writing's perfunctory, but the productions are good, the casting interesting.

A horror anthology that feels extremely comical and suffers from its variant styles. [Full review in Spanish].

You can tell everyone had their hearts in the right place with Body Bags, but the end product just doesn't really deliver the goods the way I was hoping it would.

It's easy to see why Body Bags was something of a clone of Tales from the Crypt. But as a standalone film, Body Bags is Carpenter at his funniest, as director, composer and in his rare appearance as a lead actor.

As a compilation, it's only a mediocre horror effort.

Even with the impressive talent assembled in front of and behind the camera, and a healthy budget for a television movie, Body Bags is still little more than an agreeable lark.

Occasionally predictable but still has a significant amount of suspense, a healthy dose of black humor, and a number of good performances.

High-powered modern horror directors and a good cast, but not much to it.

Not too shabby, but the masters of the genre could certainly have cooked up something more tasty.

This was meant to be Showtime Network's equivalent of the Tales from the Crypts serials. The EG Comics influence is melded with John Carpenter's Spartan gallows humor immediately with the rockabilly keyboard score. Carpenter is the emcee of three ghastly tales and he is clearly effervescent in the ringleader role of the morgue attendant. He guzzles formaldehyde and makes sardonic remarks directly to the audience about the "arriving departed" like a Rat Pack lounge singer. It's a shame the show wasn't greenlit for more seasons. He desecrates corpses with a nihilistic lightness of touch and he moves like Danny Kaye. The first segment is The Gas Station, a Hitchcockian story about a new employee at a gas station. Carpenter plagues the viewers with the fear of claustrophobic isolation where the customers could be unhinged and there is no backup for miles. Mostly though, it is a sluggish litany of in-jokes to Haddonfield, a David Naughton (from 'An American Werewolf in London') appearance and a voyeuristic cameo by Wes Craven which is amusingly leering nevertheless. It basically recycles the vexing customers of 'Clerks' with a highly transparent paranoia twist. The next segment, Hair, is more openly facetious in tone. Stacy Keach is a vain gentleman with rapidly thinning follicles and he is obsessively looking for alternatives to his issue. It's a debatably superior step above the previous yarn and Keach is vulnerably tongue-in-cheek with his quiet desperation of hair restoration via therapy tapes and dye treatment. It is ebullient when he rejoices happily in front of the mirror with his new Stallion hairstyle and it's an astute social commentary on the impotence of bald men. The final vignette is Eye, which is the most taut of the three. Mark Hamill is full-tilt hammy and this could've been his audition for the Clown Prince. None of these stories are particularly innovative but the actors are unanimously stupendous. Overall, this failed pilot is a ghoulishly mischievous standalone feature but it doesn't ascend to the top tier of anthology films.

The first cameo-rich part of this anthology isn't half bad, the others are passable, but not great. The super off pairing of Mark Hamil and TWIGGY almost works and Carpenter's turn as the Crypt Keeper-ish host is pretty silly too boot.

Not particularly amazing stories on their own, but together they make for a really cool tv movie. The whole style is just so incredibly 90s, what with the crazy music and odd design. John Carpenter's segments were the best, but Tobe Hooper's was pretty interesting as well (Mark Hamill with mustache). I kind've wish the movie was just about the hilarious zombie mortician who totally stole the show, which was incidentally played by John Carpenter himself.

Movie-buffs (and perhaps horror fanatics in particular) are strange and unpredictable beings, aren't they? Most of the time we're extremely skeptical and criticize ambitious new projects, yet sometimes we're easily pleased and highly enthusiast about something that is completely derivative, mundane and unoriginal. "Body Bags" is the perfect example to illustrate that: it's a horror omnibus existing of three incredibly prototypic segments and a repetitive type of wraparound story, yet I personally enjoyed it immensely. This is a good old-fashioned "sit back, relax and switch off all brain functions" type of anthology with a nice diversity in suspense, comedy, splatter and absurdity. Yet, the undeniable strongpoint of "Body Bags" is the all-star horror cast and crew, with legendary actors and even directors of the genre appearing in fun supportive roles and insignificant cameos. No less than John Carpenter directs two out of three stories and even stars as the host in the wraparound story. Clearly inspired by "Tales from the Crypt", Carpenter plays the witty and morbid morgue employee exactly like the infamous Crypt Keeper; though with still a little more flesh around the bones (though not too much). The first story was the most effective one! Regardless of how clichéd, repetitive and predictable "The Gas Station" is, it's a genuine horror entertainment. With the landmark "Halloween", Carpenter obviously proved he's the undeniable master of stalk-and-slash movies, and "The Gas Station" ideally fits the pattern. During her first night working in a remote gas station, Anne receives a visit from the maniacal killer who's been terrorizing the area since weeks. It's a highly segment with cool red herrings, dumb decisions, some good gore and a neatly uncanny atmosphere. The remaining two stories are slightly less overpowering, mainly because they revolve on sillier topics. "Hair" introduces an aging playboy who cannot accept his hairline becoming thinner. He desperately starts seeking for a hair-growing method that works and finds the incredibly treatment of the slightly odd Dr. Lock. Needless to say Richard's new hairdo begins to lead its own life with terrible consequences. "Hair" is obviously the most blackly comical chapter of the three. This story isn't gory or tense, but it's a very likable satire about vanity. Finally, "Eye" centers on a successful and happily married athlete who loses his eye in a tragic car accident. He spontaneously volunteers for a brand new and risky eye-transplant procedure and slowly begins to carry on with his life. Shortly after, he begins to suffer from horrific visions and learns the eye's previous owner was a sadistic serial killer. "Eye" starts off a little slow and dull, but gradually turns into an exciting and gruesome little shock-story. With a bit of imagination, you could even interpret this segment as some sort of predecessor for the more famous Asian ghost story "The Eye". Admittedly none of the stories are extraordinary brilliant or innovating, but they're definitely traditional and enthusiastically made.This is worth a look if you can find it. Be warned the out of print dvd is cut and the vhs version is uncut but still missing some footage. Hopefully the true uncut version will appear one day