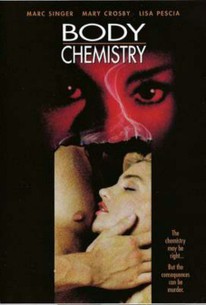 When a bodacious doctor assists a married sex researcher in the lab, they begin an affair. Before long, the regretful man realizes that he has snagged a psychopathic nymph who would rather kill him than give him up to his wife.

There are no critic reviews yet for Body Chemistry. Keep checking Rotten Tomatoes for updates!

There are no featured reviews for Body Chemistry at this time.