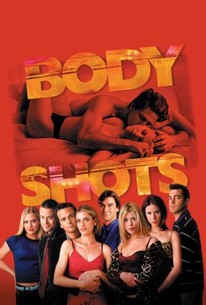 After making his directorial debut with the acclaimed made-for-cable movie Gia, writer Michael Cristofer helmed his first big-screen offering with this drama. When eight men and women in their early-to-mid-20s head out for a night on the town, hopping from one Los Angeles club to the next, not everything goes as planned as they discover the joys and perils of dating at the end of the 20th Century. Body Shots shifts among the perspectives of its eight characters, played by Sean Patrick Flanery, Ron Livingston, Jerry O'Connell, Amanda Peet, Emily Procter, Tara Reid, Brad Rowe, and Sybil Temchen. The film had a number of titles during production, including The Night Before and Jello Shots, the latter of which was reportedly axed to avoid legal problems with the company that makes the gelatin dessert product.

Scott Burkholder
as Man in Bar

Allison Dunbar
as Girl No. 3

Nick Spano
as Jeff the Doorman
View All

Awful performances, idiotic social commentary and one of the worse Rashoman narratives ever take away the pleasures of some raunchy sex scenes.

The ending is inconclusive and unsatisfactory; not only does it fail to find answers -- but they would be to the wrong questions.

Fun in small, small doses, yet utterly impersonal. A kind of stupid movie that desperately yearns to be a film.

Jello Shots is a much better title for a movie firing such insubstantial ammunition.

twist turning film that is a dud. a cast full of up and coming stars are just dull and boring

Watched this on late-night cable, and somehow I managed to watch the whole thing even though it sucked! Ok, ok I'll admit it was because of the boobage... but still it was a waste of time.

A pretty good film looking back over a night out as a group of friends recollections of the events that happened over the night vary. A sort of social comment film on 20 somethings behaviour when on a night out and where it can lead.