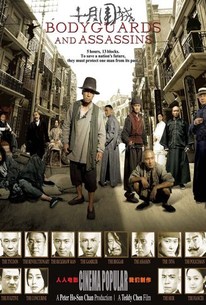 Donnie Yen and MMA fighter Cung Le star in this gripping martial arts blockbuster set in the bustling metropolis of Hong Kong in 1905. The revolutionary movement has spread throughout China, but the corrupt Qing dynasty will do anything to hold on to its power. As Sun Yat-Sen prepares for a historic meeting that will shape the future of the country, a motley crew of men and women are entrusted to protect him from a group of deadly assassins who will stop at nothing to kill him. Winner of eight Hong Kong Film Awards, including Best Film, and featuring an hour-long battle sequence unlike anything attempted before, it's a pivotal action epic that's being hailed as "a satisfying mix of politics, personal sacrifice and death-or glory combat" (Richard Kuipers, Variety). -- (C) Indomina

Eric Tsang
as Chief of Police

With its stirring dramas, riveting suspense and engaging performances, Bodyguards and Assassins focuses on a tiny moment in time to suggest that we are all in fact part of an ongoing revolution.

Like so much junk food, it tastes good at the time and hits the spot but is forgotten a few hours later.

For Occidental eyes, 'Bodyguards and Assassins' is more of a playful recreation of history than anything else.

A group of politically active citizens led a campaign to protect revolutionary leader Dr. Sun Wen from Qing assassins. That means I get to see Asian dudes kick each other.

The thematic weight of Bodyguards and Assassins comes down to the duality between varying belief systems, and how codes of honor and villainy can be associated with both sides of the battlefield.

Is there such a thing as a historical-political-martial arts-thriller? If there wasn't before, there is now. Bodyguards and Assassin's is about a group of people struggling to protect a man crucial to the rebellion against the Qing Dynasty from a group of assassins sent to kill him. Great cast and the last part of the movie is pretty amazing, but I found a lot of the first half to be boring. Maybe that's because I'm not familiar with the actual history behind the story, but Bodyguards & Assassins was just an "okay" movie to me.

My husband would tell you that he sat through the drama to get to the really good action parts. I loved the whole package. Excellently done!!

Highly awesome period action Hong Kong film. Powerful, logical and heartbreaking. This is about the assassination attempt of Dr Sun Yat Sen in Hong Kong. The first hour of this movie is entirely about setting up the characters, making you understand them and care about them. I really enjoyed this film has avoid to use mindless clichés, like ultimate fight of good vs. evil. Five 'bodyguard' characters were very brave for their life to fight over a group of assassins to protect the revolutionary Dr Sun Wen. The acting is excellent all around, many of the actors are major stars, such as Donnie Yen, Nicholas Tse, Leon Lai, and Tony Leung Ka-Fai, but the film is an ensemble piece and each star disappears into their character, many of whom are playing against type. The action is top notch, as expected with Donnie Yen's involvement. Yen has a brutal fight with Cung Le that involves some very nice choreography and some parkour action as well. Set, editing, camera work, action direction all become an integral part of this top-notch motion picture, which must be recognized as among the very best of Chinese language motion pictures in recent memory. I highly recommend this one.

An engrossing film set in the turn of 20th Century China and Hong Kong. A local businessman enlists the aid of his employees, a giant monk, a drug addict Martial Arts Master and actress to protect a Japanese envoy sent to Hong Kong to help establish democracy in China and overthrow the murderous Manchu empire. His wife enlists the aid of the father of her daughter, a gambling addict, to also protect the envoy. But the Manchu Queen has sent her legions of assassins to intercept the Envoy and kill him at all costs. The small group must protect the Envoy in his journey through Hong Kong preaching democracy. A powerful movie, the first half sees the establishing of the background and characters, the various relationships and conflicts that arise which leads to final "Gauntlet" run. Towards the end, it becomes heart breaking and emotional, even though the Mission was completed, it was an insight into how many lives that were lost for history to begin. Of course, the Martial Arts is right in the second half, as it doesn't let up. But the movie is more storytelling than action. A great cast led by the impressive Donnie Yen, Simon Yam, Tony Leung and comedy veteran Eric Tsang and supported by the liked of popular youngster Nicholas Tse, its another quality period piece,but it does lack that special something that would make it stand out... the concept and story just doesn't do it enough I think. Maybe its slow start could be an issue, because it is very un-Hong Kong, but in the end it was a successful result. Ironically, looking at today, a movie like this could only have been a dream, as the message and fight for democracy wouldn't sit well with the reigning government of the PRC, hence why it was set in back in the day. Something interesting to watch and think about, as it does show that the fight for freedom and liberty is everyone's responsibility, no matter who you are, a gambler, a drug addict, an exiled religious figure or even the son of a powerful businessman... or a businessman yourself. Enjoy!