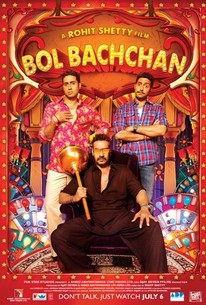 Abbas Malik lives in Karol Bagh, New Delhi with his sister Sania. They are legally fighting for an ancestral property - land case. But the odds turn against them and they lose. Their well wisher, Shastri Chacha, advises and convinces them to migrate to his village Ranakpur where he assures Abbas that he will get him a job at his owner's place. The owner being none other than the powerful Prithviraj Raghuvanshi. Abbas enters Ranakpur village and while saving a child trapped inside a temple, he breaks open the lock of an ancestral temple but fate plays an important twist in Abbas' life as the whole village including Prithviraj's step-brother Vikrant opposes Abbas' actions but Prithviraj arrives and handles the situation. On being asked his name, Abbas's friend comes out with a fake name, as it would create a rage if villagers came to know that the lock of a temple had been broken by a Muslim. From here starts a series of cover-ups, goof-ups and comic situations where to cover one lie, Abbas starts padding up with a bigger lie telling people that he also has a twin brother with no moustache. From here on starts the topsy-turvy journey of a single person acting as two different entities.

Bol Bachchan, less blaring than your standard Rohit Shetty comedy, can give you sporadic chuckles, and a few helpess laughs. Can't expect more.

This big-budget summer release starts off awkwardly with a half-hearted music number, but once it kicks into gear, the film's engaging performances and ever-spiraling hysteria make its two-and-a-half-hour running time fly by.

Bol Bachchan carries off its rapidly thinning, virtually villain-free plot thanks to its fast-paced presentation of a storyline that hinges on a succession of double identities and escalating fabrications.

It feels over-familiar, worthy of only the occasional grin.

The energy, the performances, the comedy, the story rhythms, production and styling, and the sheer manic craziness takes hold from the get-go and does not let up over its nearly three-hour running time.

Director Shetty delivers another successful comedy after box office hits like Golmaal, All The Best and Singham.

For a remake of Golmaal, the script is adequately modified to feel the difference. Unfortunately, the difference is no good. While it's been given a modern look & the budget has been no restriction, the movie on the whole doesn't stand good. I'd expected a mediocre comedy, but it turned out to be below that. The last half hour is a drag, although the rest is almost as trashy. I can only hope that Shetty has no plans for sequels!!!