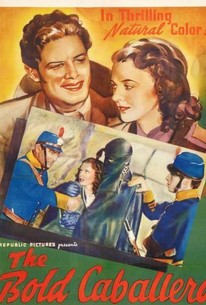 The Bold Caballero, Republic Pictures' first color film, was also the first talkie version of the "Zorro" legend (as originally set down by Johnston McCulley in The Curse of Capistrano). Robert Livingston essays the dual role of foppish Spanish-Californian aristocrat Don Diego, who when the necessity arises dons the mask and black cape of righter-of-wrongs Zorro. As usual, the Z-man spends his time defending the California peasantry from the wicked machinations of the corrupt, quasi-fascistic commandante (Sig Rumann), who has murdered the provincial governor and shifted the blame to Zorro. The film contains such marvelous set-pieces as Diego's advice to the leering commandante as to how to romance the fair Isabella (Heather Angel), and a bizarre "drag" scene in which the hero disguises himself as the heroine's duenna. Alas, current prints of The Bold Caballero are available only in black and white.

Ian Wolfe
as The Priest

Ferdinand Munier
as Landlord
View All

Critic Reviews for The Bold Caballero

There are no critic reviews yet for The Bold Caballero. Keep checking Rotten Tomatoes for updates!

Audience Reviews for The Bold Caballero

There are no featured audience reviews yet. Click the link below to see what others say about The Bold Caballero!