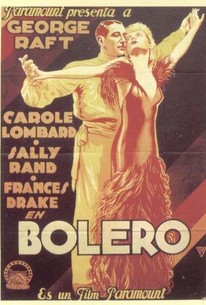 Bolero stars George Raft as Raoul de Barre, an arrogant dancer who rises to fame in the years prior to, during, and after WW I. Raoul is helped along the way by his promoter brother Mike (William Frawley) and scores of willing females, matriculating from two-bit gigolo to the greatest ballroom dancer in Paris. Determining that nothing will stand in his way to the top, he regularly fires any female dancing partner who has the misfortune to fall in love with him -- until the last of his partners, the beautiful Helen (Carole Lombard) beats him to the punch by walking out on him. His heart weakened during the war, Raoul aspires to open his own nightclub, despite warnings that if he ever dances again the consequences will be fatal. On opening night of his new establishment, Raoul dances Maurice Ravel's "Bolero" with Helen, now the wife of a British nobleman. Having reached his emotional and professional pinnacle, Raoul collapses and dies in his dressing room -- as the nightclub patrons, oblivious to his fate, loudly demand an encore. Surprisingly, George Raft and Carole Lombard's dancing is doubled by others, but the same cannot be said of the inimitable Sally Rand, whose famous fan dance is tastefully re-created here. Raft and Lombard later reteamed in 1935's Rumba.

George Raft and Carole Lombard in a picture supposed to be based on the life of the late great dancer Maurice. His estate should sue for libel.

The story is pretty ordinary but the dancing is superior and Carole Lombard is a knockout.