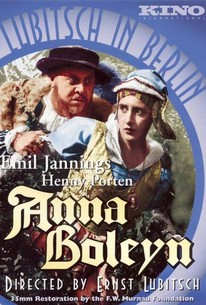 Anne Boleyn(Henny Porten) is coveted by King Henry VIII (Emil Jannings) when he tires of Queen Katherine. The ruler desires an heir to the throne, and Katherine has not provided one. Henry goes against the wishes of the pope, divorces Katherine, and forms the Church of England. Sir Henry Norris (Paul Hartmann) is her jealous boyfriend who leaves when he suspects Anne and the King of having an affair. A spectacular crowd scene is the marriage of Anne and Henry at the Cathedral and the sumptuous festivities that followed. Henry's attentions turn to Lady Seymour after Anne bears the child that would be Queen Elizabeth. Boleyn is tortured and confesses to infidelity before being sentenced to death by the pompous monarch.

Ludwig Hartau
as Duke of Norfolk

[A] curious and rather interesting production.

Lubitsch has staged it with great skill, and many of his scenes -- for sheer pictorial effect -- surpass anything that has ever been done on the screen. This spectacular quality, however, is permitted to intrude at the expense of the dramatic interest.

The glutton king is portrayed by Jannings more comically as a pervert than as an evil villain.

It's a story we all know. Jannings gives a great performance as Henry, but otherwise, this wasn't very interesting at all.