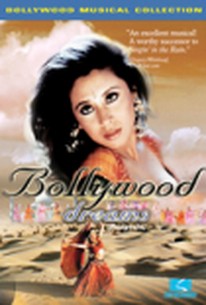 In this musical romance from India, Milli (Urmila) is young woman who works as a dancer and occasionally gets work in movies, but dreams of some day being winning fame as an actress. One day, Munna (Aamir Khan), whose family has long been friends with Mili's family, pays a visit on the set of a film in which Milli is working. Once Munna sees Milli dancing in costume, he realizes he's in love with her, but he's afraid to share his feelings with her. Munna takes Milli on a trip to the beach, but Rajkumal (Jackie Shroff), a famous actor, happens along as Milli dances along the seaside. Convinced she has star potential, Rajkumal gets Milli hired for his next picture, but as Milli's star begins to rise, Munna feels depressed and is convinced he's no longer worthy of her affections. ~ Mark Deming, Rovi

There are no critic reviews yet for Bollywood Dreams. Keep checking Rotten Tomatoes for updates!

It was okay and very predicable, cute story about an aspiring film star.