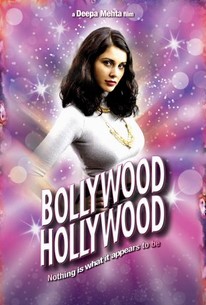 Critics Consensus: Bollywood/Hollywood admirably tries to bridge the cultures of two distinct film industries, but unrefined craft and a clichéd script hobbles its commentary on either institution.

Critics Consensus: Bollywood/Hollywood admirably tries to bridge the cultures of two distinct film industries, but unrefined craft and a clichéd script hobbles its commentary on either institution.

Critic Consensus: Bollywood/Hollywood admirably tries to bridge the cultures of two distinct film industries, but unrefined craft and a clichéd script hobbles its commentary on either institution.

Set in Toronto, a romantic tale which revolves around Rahul Seth, a Westernized, young dot.com millionaire, and his unconventional relationship with the beautiful and wild Sue Singh. Rahul is devastated after the untimely death of his beautiful, pop artist, blonde girlfriend Kimberly. To make matters worse, he is under extreme pressure from his family to get engaged to a good Hindu girl before his sister's upcoming wedding. Lest one forgets, according to the popular Hindu adage, 'the best cure for a broken heart is marriage'. Desperate, he hires the services of the gorgeous Sue, a local escort girl, to pretend to be his fiancée during the ten days of celebration, leading up to his sister's marriage ceremony. While Rahul is the scion of a typically successful NRI family, Sue is the daughter of a humble car mechanic and--professionally speaking--is one of the highest paid escorts in Toronto. They enter into the relationship as opposites. However, during this fateful period of much song, dance and merriment, Rahul and Sue's relationship slowly transcends that of employer and employee. With her passion for life, Sue manages to break through Rahul's hardened exterior to reveal a sensitive man who is not as emotionally dead as he would like to believe. In turn, Rahul's strong personality and advice enables Sue to see her parents in a more positive light.

Neeta Tandon
as Ruby's Friend No. 1

Karamjit Singh
as Ruby's Friend No. 2

Vinod Suri
as Ruby's Friend No. 3

Sveta Kohli
as Bride to be No. 1

Larissa Gomes
as Bride to be No. 2

Manjit Bumrah
as Bride to be No. 3

Imali Perera
as Twinky's Friend No. 1

Caryn Green
as Twinky's Friend No. 3

Akshaye Khanna
as Himself

The film oozes chutzpah, but regrettably the dance scenes don't match the sparkle of the performances. A pleasing romp, nevertheless -- both studio systems should feel proud.

Mehta manages to make her film not only palatable, but a real pleaser.

Does precisely what Bollywood movies should do: It engages us with its joyousness and silliness and its unflagging commitment to surface attractions.

Not authentic Bollywood, not polished enough to pass for Hollywood and not edgy enough for indie film fans.

Though neither big nor slick, it's a joyful, feel-good spoof that makes you want to run out and rent a real Bollywood musical.

Mix a good-sized dollop of Pretty Woman with some sparkling song-and-dance routines and the result is a light-hearted romp that reinvents the tried and true Bollywood recipe.

A contrived contraption, with more than a hint of desperation in its clueless anxiousness to be an audience winner along the lines of My Big Fat Greek Wedding.

While the musical numbers that season "Bollywood" are brimming with color and enthusiasm, they're not exactly overflowing with technical competence.

What starts as an examination of the common cliches of Hollywood and Bollywood ends up being condescending to both.

When the music stops, so does the magic. The film loses its footing with flat deliveries of dialogue from most of the cast.

Clearly designed to appeal to fans of both the Indian and American houses of filmmaking. Unfortunately, it's so inept that it may appeal to neither.

A good film to watch.

Bollywood meets Pretty Woman. In case you don't know what Bollywood is. It is the type of film made in India involving melodrama and over-the-top dance numbers. This movie thinks it is clever because it takes those themes and mixes it with a 'hollywood' plot.It's not clever, it's not funny, it's not wink wink funny either. The jokes are not funny. The actors do a terrible job. The dancing is just too ridiculous. Half a star for each breast of the escort girl who, of course, has a heart of gold, and another half for Rockini.