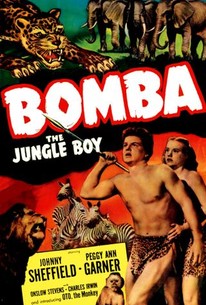 Inspired by the adventure-book series by Roy Rockwood, Monogram's Bomba the Jungle Boy was the first of a series of twelve "Bomba" pictures. Johnny Sheffield, formerly "Boy" in the Tarzan pictures, stars as Bomba. Another former child performer, Peggy Ann Garner, co-stars as Pat Harland, who with her father George (Onslow Stevens) has arrived in Africa on a photographic expedition. Bomba ends up rescuing Pat from a wide variety of jungle villains. Much of the film is built around stock footage from a 1930 documentary, Africa Speaks. Economically produced, Bomba the Jungle Boy proved a profitable beginning for one of Monogram's most successful series.

There are no critic reviews yet for Bomba, the Jungle Boy. Keep checking Rotten Tomatoes for updates!

There are no featured reviews for Bomba, the Jungle Boy at this time.