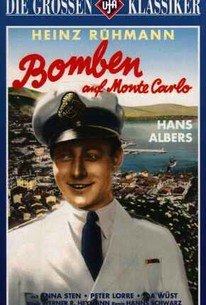 Despite its title, the German musical comedy Bomben auf Monte Carlo is not a war picture -- not in the traditional sense, anyway. Hans Albers stars as a naval captain from a small, mythical kingdom who heads to his consulate in Monte Carlo, complaining that neither he nor his crew have received their wages in months. The Queen (Anna Sten), travelling incognito, overhears the Captain's beef and sells her pearls to pay his salary. Not knowing the queen's true identity, the captain accompanies her to the gaming tables, where they win an enormous sum of money -- only to lose it all on the draw of a single card. Once more unable to pay his crew, the captain threatens to aim his ship's guns at Monte Carlo and blow up the casino unless his money is returned. At this point, the queen reveals her true identity, then relieves the captain of his command. He jumps ship, she jumps after him, and the two fall in love. Such was Hans Albers' popularity in 1931 that few cared whether his films made sense or not. ~ Hal Erickson, Rovi

There are no critic reviews yet for Bomben auf Monte Carlo (Bombs Over Monte Carlo)(Monte Carlo Madnes). Keep checking Rotten Tomatoes for updates!

There are no featured reviews for Bomben auf Monte Carlo (Bombs Over Monte Carlo)(Monte Carlo Madnes) at this time.