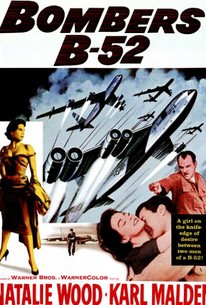 Karl Malden plays an air force sergeant who is tempted by a better-paying civilian job. Malden's daughter Natalie Wood is in love with a young colonel (Efrem Zimbalist Jr.) whom her father regards as an insolent hothead. The younger man proves his worth during jet maneuvers, while Malden decides that he's of more value in the service than as a working stiff. Bombers B-52 has some excellent moments, including a well-staged variation of the obligatory "breaking the news to the pilot's widow" scene. The film earned latter-day notoriety in the 1980s when a prominent movie historian analyzed the script (by Irving Wallace) and found an overabundance of sexual innuendo--including such in-flight dialogue as "She's unable to receive fuel" and "Request jet penetration!"

Critic Reviews for Bombers B-52

Clumsy melodrama about the latest in Air Force long range bombers and the service men who maintain them.

Audience Reviews for Bombers B-52

Mediorce drama with some good aerial photgraphy but a commonplace story. Although top billed Natalie's part is subordinate to the plot and her character is something of a pill but she is stunning. Malden is good as is Marsha Hunt although she is throughly wasted in a nothing part. Zimbalist is wooden.