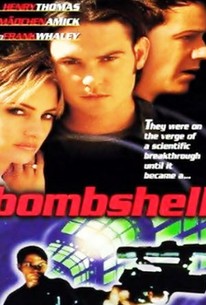 This sci-fi thriller is set in Los Angeles. The year is 2010 and the mega-corporation Nanolabs is feverishly preparing to market its latest medical marvel: a microscopic "engine" that can regenerate organic tissue at a cellular level and thereby provide the first real cure for cancer. Unfortunately, back in the lab, young scientist Buck Hogan (Henry Thomas) becomes increasingly concerned, as animal subjects implanted with the machines begin dying at an alarming rate. He voices his worries to the company CEO, but he is too interested in reaping the product's profits and decides to release the unsafe substance anyway. Later, Buck is captured and knocked out. When he awakens, he discovers himself sans one kidney. In its place is a biodegradable sack filled with acid that will kill him if he doesn't get the antidote. The one who performed this ghastly deed, has even more evil plans for poor Buck who, before the story ends, will end up a human time bomb with very few seconds left on his life clock. If Buck cannot stop it, he will not only die, but the deadly new cancer cure will be released, thereby endangering the entire city.

Jim Levelett
as Cop No. 1

Gina Angela Ritchie
as Cop No. 2

Michael McLafferty
as Cop No. 3

Ethan Wayne
as Cop No. 4

There are no critic reviews yet for Bombshell. Keep checking Rotten Tomatoes for updates!

There are no featured audience reviews yet. Click the link below to see what others say about Bombshell!