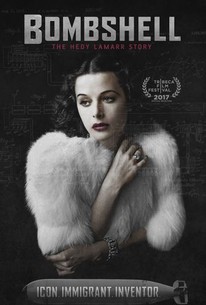 Critics Consensus: Inspiring and tragic, Bombshell is a bittersweet celebration and reclamation of Hedy Lemarr's journey from Hollywood legend to technology genius.

Critics Consensus: Inspiring and tragic, Bombshell is a bittersweet celebration and reclamation of Hedy Lemarr's journey from Hollywood legend to technology genius.

Critic Consensus: Inspiring and tragic, Bombshell is a bittersweet celebration and reclamation of Hedy Lemarr's journey from Hollywood legend to technology genius.

When Nazi U-Boats torpedo a ship carrying 83 school children during World War II, Hollywood movie star, Hedy Lamarr, decides to exact revenge. At night, after shooting her scenes on set, she works on a secret radio system that will allow the Allies to torpedo Nazi U-Boats with deadly accuracy. Her sketches remain ideas until a chance encounter with an eccentric composer enables her to transform them into useful technology. The secret communication system she creates is groundbreaking and eventually changes the course of history. It would make a terrific fictional film, but this story happens to be true. Hedy Lamarr, the screen siren who was called "the most beautiful woman in the world" and starred alongside Hollywood giants like Spencer Tracy, Jimmy Stewart and Clark Gable, invented a wireless form of communication called "frequency hopping" that revolutionized mobile communications all over the world, a feat that would directly lead to the creation of secure communications for wireless phones, Bluetooth, GPS and WiFi technology itself

Not your usual silver-screen documentary.

A fascinating documentary about Hedy Lamarr, an extraordinary woman who was so much more than the moviegoing public ever imagined.

It's a reminder that, even for world-famous icons, it's pointless to reduce people to a single piece of notoriety.

Bombshell suffers from some common complaints of modern documentary -- too much music; unnecessary, if perfectly decent, animated sequences -- but it does remind us of a class of personality that doesn't exist anymore.

Lamarr was an enigma: a great brain trapped in a silly, spurious image of glamour, while her real talent was allowed to wither. A sad but fascinating story.

Bombshell is a movie a million years in the making. Bombshell is a hand grenade tossed into our current gas-fire of a situation - it's the movie we need, the story we need, to tell right now

Bombshell suggests that Lamarr was largely wasted by the film industry, which could make little use of her personality and intellect. "

Director Alexandra Dean gets the most out of a peculiar mix of on-camera interviews, archival footage and recently discovered audiotapes of Lamarr explaining herself posthumously.

There are no featured audience reviews yet. Click the link below to see what others say about Bombshell: The Hedy Lamarr Story!