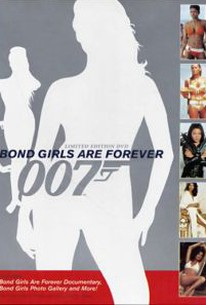 First screened at the Hamptons International Film Festival, the 60-minute documentary Bond Girls Are Forever made its cable TV debut a mere 16 days before the premiere of the newest James Bond theatrical feature, 2002's Die Another Day. (Coincidence? We don't think so) Through vintage film clips of past Bond movie epics, and with the participation of several former "Bond Girls" as interviewees (among them Dr. No's Ursula Andress and Diamonds Are Forever's Jill St. John), the documentary traced the evolution of the typical James Bond heroine from decorative damsel in distress to gutsy (but still decorative) participant in the action. In addition to the provocatively named romantic partners enjoyed by the various movie Bonds over the past 40 years, the viewer is treated with the input of Judi Dench, the most recent actor to play 007's no-nonsense superior officer, M. Bond Girls Are Forever was co-produced and narrated by Maryam d'Abo, who appeared opposite Bond number four, Timothy Dalton, in The Living Daylights.

There are no critic reviews yet for Bond Girls Are Forever. Keep checking Rotten Tomatoes for updates!

Bond Girls Are Forever is an interesting documentary that explores the world of the Bond Girls from the James Bond film series. Maryam d'Abo, star of The Living Daylights, hosts the film and interviews several actresses from the different eras of Bond, and gets their take on what a Bond Girl is and how it has impacted their lives. Some of the actresses interviewed include Ursula Andress, Maud Adams, Jane Seymour, Rosamund Pike, and Halle Berry. There's really not that much depth to the documentary, but on a surface level it does provide a lot of interesting information about the actresses and about the changing sensibilities that the series has had toward the Bond Girl. As Bond Girls Are Forever aptly demonstrates, the actresses of this series have played a major part in defining the franchise, and have an iconic quality to them.