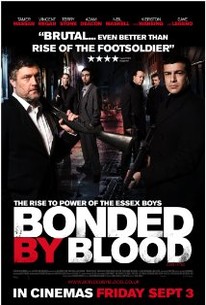 This biographical thriller charts the notorious rise of southern England's most famous gangsters-- Tony Tucker, Patrick Tate, and Craig Rolfe. The trio of drug suppliers and career criminals were found in 1995, blasted to death by a shot gun in a Range Rover in Essex. A stronghold of fear and violence that allowed them to maintain a large, drug fuelled empire perhaps led to their untimely deaths.

Critic Reviews for Bonded By Blood

A pungent mess of gangster cliche.

A thin, wan script, acting that's mostly embarrassing, and a stream of foul expletives where a script should be.

Decently made and well-acted, but with a whiff of glossy, high-life voyeurism.

Worth watching, but the whole just isn't nearly as effective as some of the parts.

Based on the same true story previously told on film with skill (2000's Essex Boys) and without (2007's Rise of the Footsoldier), it's kind of difficult to understand why there's yet another movie version. Especially one as uninteresting as this.

Everything from script to performances goes through the motions, with only Vincent Regan's Mickey registering in more than one dimension.

Though director Sacha Bennett's effort is well shot and evokes its mid-nineties setting well, its disjointed structure makes for a weak narrative, and only in the third act does it finally come together with any sort of momentum or urgency.

Uninspired, ridiculously sweary British gangster thriller that's let down by tedious characters, a badly written script and a dull storyline that fails to provide a reason to care.

One must question whether it needs to exist at all, ploughing as it does an already well-worn crime-film furrow.

There's no hiding the fact that Bonded By Blood is ultimately pretty anaemic, giving no further insight into an already over-exposed incident.

There are no featured reviews for Bonded By Blood at this time.