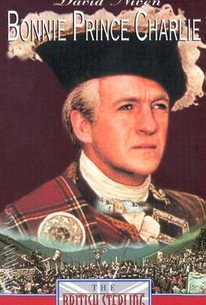 In one of his rare visits to his home turf, British actor David Niven essayed the title role in Bonnie Prince Charlie. The film's principal challenge was to transform 18th-century Scottish Prince Charles into a sympathetic character, which, patriotism aside, he most decidedly was not in real life. The court-intrigue scenes are the weakest aspect of the film; the strongest moments take place on the battlefield, where Charles "the pretender" and his followers face down the battalions of King George II (Martin Miller). Even in defeat, Charles is the victor, successfully eluding his British pursuers and escaping to France. Filmed in Technicolor at a cost of $4 million, Bonnie Prince Charlie fell with a thud when it premiered at a kidney-busting 140 minutes. Subsequent reissues were cut by as many as 40 minutes, and some were economically reprocessed in black-and-white. Thanks to constant exposure on American television, this notorious flop finally posted a profit in the late 1950s.

Finlay Currie
as Marquis of Tullibardine

Elwyn Brook-Jones
as Duke of Cumberland

Stuart Lindsell
as MacDonald of Apridale

G.H. Mulcaster
as Duke of Newcastle

Alan Judd
as Stewart of Ardshiel

The stimulating possibilities offered by Scotland's gallant Young Pretender are only feebly exploited in this garrulous screenplay starring David Niven.

There are no featured reviews for Bonnie Prince Charlie at this time.