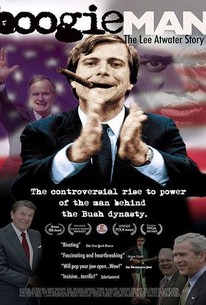 Critics Consensus: Boogie Man is a complex, absorbing study of the contradictory life and times of architect of modern smear politics.

Critics Consensus: Boogie Man is a complex, absorbing study of the contradictory life and times of architect of modern smear politics.

Critic Consensus: Boogie Man is a complex, absorbing study of the contradictory life and times of architect of modern smear politics.

"Boogie Man" is a comprehensive look at Lee Atwater, the blues-playing rogue whose rambunctious rise from the South to Chairman of the GOP made him a household name. He mentored Karl Rove and George W. Bush and played a crucial role in the elections of Reagan and George H.W. Bush. He wrote the Republican Party's winning playbook which the McCain campaign is currently using.

Director Stefan Forbes has assembled a brilliantly complex portrait that shines an unnerving light on the man who painted the landscape of contemporary American politics.

By the end of Forbes' brisk, economical portrait, Atwater has been revealed as a repugnant and pathetic soul--and a political visionary, among the first to fully understand and harness the raw power of voters' fears.

Stricken with brain cancer in 1990, Atwater renounced his Machiavellian ways, but as Forbes points out, his legacy lives on in his eager proteges Karl Rove and George W. Bush.

Boogie Man is a fascinating portrait of an almost likable rogue.

Instead of attempting a character study, Boogie Man returns an indictment.

Boogie Man provides an incisive and fascinating look at a man who sold his soul for victory.

Boogie Man is an incredibly timely and relevant film that uncovers the origins of political dirty pool (Atwater was the architect of much of the attack-ad style currently being deployed in the 2008 American election).

Fascinating to a political junkie like me who wasn't aware of the game back then.

A morality tale about the sewer politics of the Republican Party since Reagan and very relevant to the 2008 elections.

A cinematic smear job against Atwater would be the easiest thing in the world, but Forbes is more interested in presenting a complex character study than a piece of liberal agitprop.

Both fascinating and upsetting, and makes you wish politics weren't so, well, political.

It tells its story in a way you might expect, but it has a few fascinating moments where even Atwater's most ardent defenders of his political tactics in Republican campaigns still decry him as a vicious monster capable of anything. It might even be fair to say that they only liked him because he was on their side.