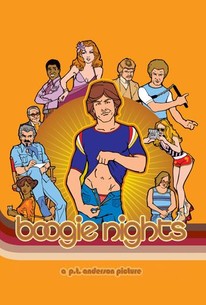 Robert Ridgely
as The Colonel

Jake Cross
as Watcher No. 2

Tom Dorfmeister
as Watcher No. 1

Allan Graf
as Man with Gun

Mike Gunther
as Surfer Punk No. 2

B. Philly Johnson
as Rahad's Bodyguard

Israel Juarbe
as Maurice's Brother No. 1

Skye
as Jacuzzi Girl No. 1

Summer Cummings
as Jacuzzi Girl No. 2

The pop 1970s were typified in part by cheesy fashions, ephemeral music and a regular diet of daring, cutting-edge movies that arguably made that decade Hollywood's richest. Blistering Boogie Nights recaptures the spirit of that time on all three counts.

The Tarantino comparison is ultimately less about technique than a shared joyful electricity of the filmmaking, the sense of an artist clearly high on the sheer act of making a movie.

Nights humanized these actors and made them live beyond their reputations.

Not since the mysteriously reclusive Terrence Malick has there been such an explosion of sheer talent on the American movie scene.

Philip Seymour Hoffman is a standout in a movie chock-full of standouts.

Rarely, if ever, has any filmmaker depicted the void with so much sparkle and wit.

A fantastic take on a Golden Era that nobody wants to remember and it's pretty relevant. [Full review in Spanish].

...there is enough brilliance-including a drugs-and-guns showdown that outdoes Tarantino-to make it worth sticking around for the end of the party. And nothing could be truer to the Seventies than a party that goes on too long.

It is remarkable that [Seymour Hoffman] was able to stand out-it's packed with great performances from some of the best of the best: Don Cheadle, John C. Reilly, William H. Macy, Heather Graham, and, of course, Burt Reynolds.

Boogie Nights is an impassioned and creative portrait of American souls in distress from a young, passionate filmmaker who threw himself headlong into his movies (his follow-up, Magnolia, pushes even further).

A well-done "Goodfellas"-esque take on the porn industry during its heyday and a naive young man (Mark Wahlberg) with a special "talent" who goes from waiter to adult film star after being plucked by a wealthy titan (Burt Reynolds) of the business. Not only is this movie a serious, saddening take on those involved in the industry who wreck their lives seemingly without trying, it is also a successful satire whose dark sense of humor is much needed to a film full of such despair, loneliness, and depravity. It does suffer from over-population from a character standpoint (especially William H. Macy in a thankless, pointless role that does not utilize his talents properly), but its ability to possess a certain sweetness is a phenomenal feat for director Paul Thomas Anderson to pull off. It has style, laughs, a riveting lead performance from Wahlberg, some excellent supporting turns, memorable scenes (hello Alfred Molina cameo!), and an ending that doesn't leave you as depressed as many of its characters become. Not a film for everyone, certainly a graphic portrayal of a seedy business, but still a fascinating take on those involved in it.

A great film about the emptiness of youth, fun and the fast life. Re-watched it on the night of Hoffman's passing and it's no less remarkable than the times I saw it before.