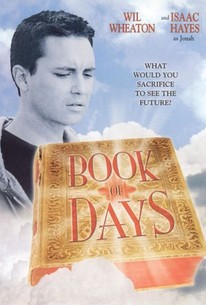 When lovelorn groom Danny's (Wil Wheaton) wife suffers a tragic death on the couple's wedding day, the arrival of a mysterious book places his entire future in jeopardy in this supernatural drama from filmmaker Harry Ambrose. Shortly after Danny's wife's untimely death, a mysterious courier named Jonah (Isaac Hayes) bestows the grief-stricken groom with a book that features a list of names followed by corresponding death dates. Now faced with the decision of using the book for his own financial gain or helping to protect his loved ones from their own fate at the risk of having years shaved off of his own life, Danny must make an important decision as to how to handle the otherworldly information with which he has been entrusted.

Richard Grieco
as Finch
View All

Critic Reviews for Book of Days

There are no critic reviews yet for Book of Days. Keep checking Rotten Tomatoes for updates!

Audience Reviews for Book of Days

There are no featured audience reviews yet. Click the link below to see what others say about Book of Days!