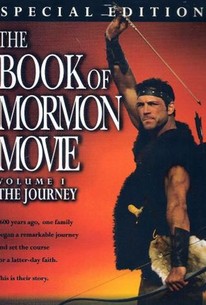 This first in a planned series of films devoted to telling the tale of the Mormon faith in America, The Book of Mormon charts the recorded history of Nephi (Noah Danby) as he leads his people from Jerusalem to the "Promised Land" of the Americas. Along the way, Nephi must contend with his infuriating brothers Laman (Mark Gollaher) and Lemuel (Cragan Foulger), battle the elements, and protect his family from the wilds as he carries out God's mission for him. Though not sponsored or endorsed by the church, The Book of Mormon made its premiere in Utah and areas with a high LDS-population before expanding to some other states.

Critic Reviews for Book of Mormon

Mormon movies are a burgeoning industry in Utah, and despite the niche audience and low budgets, some of them hold their own with Hollywood in terms of storytelling and entertainment value. The Book of Mormon Movie, however, isn't one of them.

With a little more publicity, word of this sturdy little adaptation of LDS scripture might have reached a bigger audience.

On a shoestring budget of $2 million dollars the production looks amateurish in every detail from the inauthentic costumes to the sparse sets to the camera work that rarely reveals anything other than close-ups.

Those who hold LDS religious beliefs dear will find moments of meaning and palpable sincerity. But good intentions alone do not constitute a worthy film.

A plodding, repetitive, ham-fisted attempt to create a Ten Commandments-style epic without the resources or bravado required to pull it off.

It's so slowly paced, so flat-footed that it fails to engage on any level. Even for all but the most eager-to-please of audiences.

Audience Reviews for Book of Mormon

There are no featured audience reviews yet. Click the link below to see what others say about Book of Mormon!