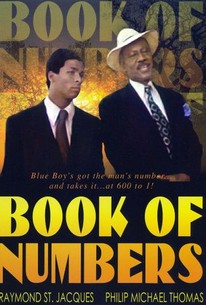 Raymond St. Jacques both directs and stars in The Book of Numbers. St. Jacques and Philip Thomas play depression-era African Americans, barely making out an existence as waiters in a deep-south community. Both men decide that there's more money to be had on the shadier side of the law, so they set up a successful rural numbers racket. All goes well until the operation attracts the attention of white crime boss Gilbert Greene. Though no one is particularly admirable in The Book of Numbers, the audience remains firmly on the side of the black characters, if only by default. The film was based on a novel by Robert Dean Phaar.

Pauline Herndon
as Sister No. 2

Ethel Marie Crawford
as Sister No. 3

Critic Reviews for Book of Numbers

There are no critic reviews yet for Book of Numbers. Keep checking Rotten Tomatoes for updates!

There are no featured reviews for Book of Numbers at this time.