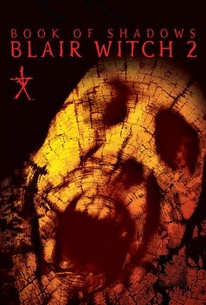 Critics Consensus: This sequel to Blair Witch Project is all formula and no creativity, mechanically borrowing elements from the original and other horror movies.

Critics Consensus: This sequel to Blair Witch Project is all formula and no creativity, mechanically borrowing elements from the original and other horror movies.

Critic Consensus: This sequel to Blair Witch Project is all formula and no creativity, mechanically borrowing elements from the original and other horror movies.

Adventure and fantastical treasure await a young man on a quest to discover an ancient book whose contents hold the secret to life in this adventure tale from director Rob Reiner and scribe Zoe Green. ~ Jeremy Wheeler, Rovi

Bruce Reed
as Burkittsville Resident No. 1

Lynda Millard
as Burkittsville Resident No. 2

Deb Burgoyne
as Burkittsville Resident No. 3

Joe Berlinger
as Burkittsville Tourist No. 1

Sara Phillips
as Burkittsville Tourist No. 2

Pete Burris
as MBI Man No. 1

Briton Green
as Stoner No. 1

Erik Jensen
as Stoner No. 2

Peggy K. Chang
as Foreigner No. 1

Tony Tsang
as Foreigner No. 2

Anja Baron
as Foreigner No. 3

Andrea Cox
as Burkittsville No. 4

Tyler Zeisloft
as Teenager No. 1

Richard Kirkwood
as Teenager No. 2

Justin David Fair
as Teenager No. 3

It is just another dreadful teen horror flick--albeit one gussied up with self-conscious notions about the thin line between perception and reality.

The real problem here may be that Blair Witch 2 was made simply -- and only -- because Blair Witch made a lot of money.

A muddled if appealing failure.

A pale shadow of the diabolically clever piece of video hocus-focus that was The Blair Witch Project.

A plausible premise, visual tricks and a little blood don't help this sequel to rise above largely formulaic territory.

The film with which we are left is arguably one of the most disappointing horror sequels of all time.

The dialogue is brutal, to the point of cringing in many a scene, then it gets far too expository to take seriously.

It at least aims for different and something that pays tribute to the first film more than anything.

This film was cranked out awfully fast.

The arguing goes on and on, until you just want someone to die so you can go home already.

It is inevitable that a film made for $60,000.00 with a return of almost $250,000,000.00 at the worldwide box office would get a sequel, but the least you could do is try to make something somewhat enjoyable. Take 2008's Iron Man for instance. They made that film in hopes of it becoming a success in order to expand on the Marvel universe. Granted, that universe already had a fanbase, but you see where I am going with this. The Blair Pitch Project was made on a shoestring budget with hardly a skeleton crew. I am positive that their hopes were to enter it into a film festival and gain some viewers, which would in turn get their names out to the world. Although the directors of the original film are no longer heard of today, as they were kind of one-hit-wonders, even then it seemed insanely quick for a studio to whip up a sequel. In just over a year, a sequel was produced as a cash grab. Lets talk about horrendous it was, and still remains to this day. Following a group of teenagers after they have viewed the film The Blair Witch Project, they venture into the woods to study the myth even further. They also bring cameras and bizarre things begin to happen to them. Now, at first you may start to commend the film for being different and flashing back and forth throughout time, but it also gives away the ending of the film, which is awful anyway, but that is aside from the point. While much more happens in this film, it also takes away the creepiness that the first film was able to pull off. With a $15,000,000.00 budget, it was clear that the studio was looking to make the same numbers as the original, but in turn it only ended up earning them under $50,000,000.00. While that return is not necessarily a box office bomb, it was clear that it was a one-time type of film. If they wanted to make a cash grab, they could have at least did the same movie over again with new people, but this film just makes the original feel like The Godfather of horror films. The original film relied solely on the shaky camera, clever sound design, and the performances in order to send chills down peoples spines. Book of Shadows: Blair Witch 2 cuts to flashbacks of people being stabbed and branding being done, many more times than it needed to. Due to the fact that the core story was more of a mystery than a horror this time around, the filmmakers seemed to need to cut back to shocking moments to make its audience feel uneasy. It was cheap and I hated watching each and every trick that the filmmakers tried to pull on the audience. I would have liked this more as a mystery/thriller, but they were too afraid to take any chances. Overall, Book of Shadows: Blair Witch 2 tries to do something different with its story in the first act in order to make the audience feel like they are in for something very interesting; However, that is not the case at all. Fooling its audience into thinking it is a horror film and building up tension to a final scene that is laughably executed, this film fails on almost every level. The performances in the first film felt real and believable, but I found myself chuckling at most of the line deliveries throughout this film. Book of Shadows: Blair Witch 2 is the epitome of a cash grab sequel that failed to hit every mark that it was striving for. Die hard fans of the original film won't even be able to find any enjoyment out of this train wreck of a sequel. The only thing that is remotely similar would have to be the fact that it takes place in the woods once again. This film is boring, laughably acted, and edited together faster than any horror film I have ever seen. Aside from a few promising moments in the first act, it is complete trash.

Kim: Something happened to us in the woods... something evil.  "The terror continues..." Book of Shadows: The Blair Witch 2 has to be the worst horror sequel I have ever seen. It's worse than Jason X, it's worse than Halloween 3. In saying that, I'm also sort of happy in a way, that Book of Shadows was so terrible. If it had been even a slight success, there would have been a crazy amount of additional sequels dished out. As it is, this killed the sequels and we haven't been shown any for 12 years. Thank God.  Book of Shadows took everything that was cool and terrifying about the original and threw it out the window. The first relied on its small budget as a way to scare. Instead of showing us all the details, they left it to our imagination. This one decides to show just about everything. They show us tons of blood, in a schizophrenic and hectic sort of way. We are shown hallucinations of what characters think is happening and everything seems like it is passing over everything else. It's like a 3 year old with a coloring book. Initially you can see what the picture is, but after they've scribbled on it with ten different colors in incoherent ways, all that's left is a mess.  This takes place shortly after the hysteria of the first film. At the start we are shown clips of late night shows and critics speaking about the film. We are given a fake news broadcast that is showing us how everyone is overrunning the town of Burkittsville. Locals say it isn't true, and the sheriff tries to keep all the tourists out of the woods. One local takes it upon himself to cash in on the hysteria, creating the Blair Witch Hunt. He takes some tourists out to some spots and they party. They wake up remembering nothing. All their stuff is thrown about and they have weird marks on their flesh. They then retire to the locals house, which is a factory, in order to decode what has happened with their cameras. Don't watch it. I love the first one, but this is just a waste of time. It adds nothing to the Blair Witch story and only serves as a film Artisan thought they could make some money off of. Once again, Thank God they didn't.

One of the absolute worst films I've ever seen. The saddest part is that I was among those poor, poor fools who actually paid to see this tripe in the theater.

Good, but at times confusing. The ending is also rather abrupt. It's an interesting take on the media hype surrounding the first, but its success as social commentary is limited. Take it as another B-movie style tie in and it will satisfy you more. Also, Kim Director. Wow.