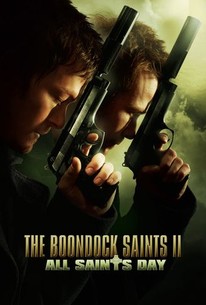 Critics Consensus: This sequel to the cult favorite The Boondock Saints is more of the same -- unoriginal, absurd, violent, over-the-top, and occasionally mean-spirited.

Critics Consensus: This sequel to the cult favorite The Boondock Saints is more of the same -- unoriginal, absurd, violent, over-the-top, and occasionally mean-spirited.

Critic Consensus: This sequel to the cult favorite The Boondock Saints is more of the same -- unoriginal, absurd, violent, over-the-top, and occasionally mean-spirited.

Boondock Saints, the 2000 crime picture renowned for the unique story of the fast rise and fall of its egomaniacal filmmaker, Troy Duffy, as well as the cult following that appeared later on home release, gets the sequel treatment with this follow-up. Sean Patrick Flanery and Norman Reedus reunite as the vigilante MacManus brothers, with Billy Connolly returning as Il Duce. Duffy once again directs from his own script, with Clifton Collins Jr., Julie Benz, and David Della Rocco filling out the rest of the cast.

Peter Fonda
as The Roman

Richard Fitzpatrick
as The Chief
View All

Critic Reviews for The Boondock Saints II: All Saints Day

Forget the mob, the MacManus brothers should be more worried about Duffy ruining their reputation.

The plot is an afterthought, the performances given with a wink and a clip-emptying flourish.

Imagine Quentin Tarantino if he got his brow lowered.

Bold prediction: At his current glacial pace of progress, Troy Duffy is likely to write and direct the great Irish-American payback movie sometime in the year 2049.

Writer-director Troy Duffy needs to YouTube himself a new idea or two, because his variations on themes provided by Quentin Tarantino and Guy "RocknRolla" Ritchie are pure mold.

Can you fly forward through the air while firing two heavy-duty handguns without your arms jerking back and smacking you in the chin? Would that violate one of Newton's laws? Just askin'.

Story wise it has all the depth of a UFC match and is just about as well acted.

[Norman] Reedus pretty much captures the entire film with his signature line: "Let's do some gratuitous violence."

For fans of the original underground hit, the sequel we were all wishing for has arrived.

"There's not a bigger '**** you!' from Hollywood than when they say: 'Eh, we're not going to release this film,'" "The Boondock Saints II: All Saints Day" star Sean Patrick Flanery said in an interview.

If you liked the original "The Boondock Saints," you won't want to miss this one.

Idiotic style over some sorely needed substance....comes across cringingly rusty; a glorified fan film that only manages to make the popularity of the original picture all the more bewildering.

Audience Reviews for The Boondock Saints II: All Saints Day

Roughly a decade or so after the courtroom slaying of crime boss Papa Joe Yakavetta, the MacManus Brothers and their dad are living quiet lives as shepherds in Ireland. When a Boston priest is killed in the trademark style of execution used by the Saints, the boys come out of hiding to set things right. The film also goes more into the past of Il Duce. And, as you might imagine, the two plot threads are connected in some way. It was great to see the boys back in action, but this one was a big step down. On paper, the concept is cool, but the execution of it is where things falter. The film takes all of what was both good (and bad) about the first, and cranks it up to maximum. In a lot of ways, it feels basically like the first one all over again, only with more money and far more excess. There's not much of the charm from the first one here, things feel like they're coasting on fumes, and the humor, while occasionally funny, mostly falls flat and feels tired. The acting and the action are quite ridiculous and over the top, but these things can, depending on your pov, either add to the fun, or add to the tedium. I mostly enjoyed the action, and think this is the film's strongest point. The performances are...okay. Like I said, it's the first movie, but on steroids. Flannery and Reedus are good, as is Connolly, but, as much as I like Clifton Collins Jr. I think he went way too over the top here. It was nice to see Judd Nelson come out of wherever he's been, but even he gets a little too off the rails at times. I think this film is probably best enjoyed if you watch it hammered, but that's just me. I'm glad they finally made it, and, though I have my reservations, I do want to eventually get a third film to cap things off. However, I hope that if a third one gets made, that they cut out the excess, beef up the story, and deliver something truly compelling instead of just half-assing it.

A bit disappointing as the first one was absolutely fantastic and although an okay movie i cant help but compare it to the first so its okay but the first is just far better!

Except if you are The Godfather: Part Two, it is nearly impossible to make a sequel that is equal or better then the original. It just is. The reason why is because when you first create an idea and make a film about it, that is it at it's purest and at it's hieght. With sequels, the idea is already exposed and the shock that the idea gave people is already used up. With a film like The Boondock Saints II: All Saints Day, what it does is take what people love from the first film and just rehash it a second time. The main complaint of the first film was that it was a copy of the films of Quentin Tarantino. My response was that it was more of a tribute (could have been better) to his films then a rip off. If any of the films is a rip off, it is this film. Actually, if one really thinks about it, Troy Duffy is making a parody of his own film. But he could of, at least, done so with some honor and dignity. I don't know. I mean, I did enjoy this fim a bit, but it could have been much more. So much more. But the main problem, other then rehashing parts of the previous film, is that it takes from so many other films whose sequels were better then it's original. The main one that comes to mind is the back story of Il Duce told in a psuedo The Godfather Part Two fashion. Just replace the Sicilian backdrop with an Irish one. Then you also have the cast which, in their own right, are okay actors for the most part, are not used to their potential. But I feel the most bad for Clifton Collins. If you have seen the original film, then you will know that he will be compared to and is basically playing the same part as David Della Rocca. It is just kind of sad that Duffy had to right in a comic relief guy to go along with the already comic relief of the three detectives in this film. My advice for Duffy: keep the comic relief down to one character. Have too much, it will then ruin the film. So, that is all I have to say about the sequel. it is entertaining as hell to watch, has it's moments of awkward humor, but it has so much potential, has so much it could do, hell, it could even have made Troy Duffy some respect after he lost it with The Boondock Saints (in the eyes of critics) and in the documentary Overnight (in the eyes of everyone else). Now, there is a cliffhanger at the end of the film along with one cameo that made me scream 'YES!' at the end. If there would be a sequel to this film, then I have a message for Troy Duffy: Actually write an original screenplay that is not complete crap. You have everything set up, you have your story and mythology (granted you borrowed and ripped off a lot). USE it.

The MacManus Brothers return to Boston to kill more people. There are some sequels, The Godfather Part II and even the second Terminator film, that build on the original film, and there are other sequels, like this one, that merely attempt to imitate the original. Clifton Collins as Romeo attempts to replace Rocco for comic relief and schtick, and Julie Benz does a Willem Dafoe with a Southern accent impersonation, complete with a scene that is clearly a poor man's "There was a firefight!" Also, I know this makes me a bad American and the wrong audience for a film like this: I don't find murder all that sexy. The slow motion shots and the almost sexual arousal the boys get from picking out new guns perplexes me, and too much of the film centers on this fixation with violence. The performances were all fine, nothing you'd show in an acting class as either "don't do" or "do;" although, Collins's performance gets annoying after a while. Overall, there's nothing new in this installment of Boondock Saints unless you count characters' new armory.