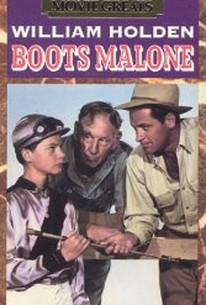 William Holden plays Boots Malone, a dishonest--and impoverished--jockey's agent. Malone sees a chance to crack the big time through the talents of young jockey John Stewart. Stewart's wealthy mother wants to remove the boy from the rarefied world of the race track, but it is Malone himself who destroys his friendship with Stewart by ordering the boy to throw the race, or else they'll be put on the spot by gangsters. Malone's last-minute regeneration restores Stewart's faith in him. Filmed on location, Boots Malone is a satisfying horse-race drama, though one might expect a little something extra from star William Holden and director William Dieterle. ~ Hal Erickson, Rovi

[Milton Holmes] is a born story-teller even if his stuff runs to pulp. His script treats the actuality of working for a living and does it without those short cuts that chop current movies into static fragments.

Few racetrack movies have been more solidly interesting than this one...

William Holden as an once upright guy doing the agonizingly slow slide into corruption and dissipation, and how, fueled by his desolation demons due to the death of his wife and daughter and his best bud. An upright kid offers him the chance for a turnaround...if only he'd take it. That it all happens around the racetrack only adds atmosphere. Good stuff.