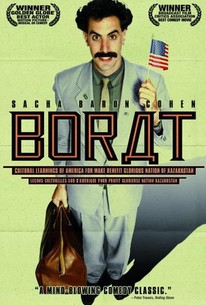 Journalist Borat Sagdiyev leaves his native Kazakhstan to travel to America to make a documentary. As he zigzags across the nation, Borat meets real people in real situations with hysterical consequences. His backward behavior generates strong reactions around him, exposing prejudices and hypocrisies in American culture. In some cases, Borat's interview subjects embrace his outrageous views on race and sex by agreeing with him, while others attempt to offer a patriotic lesson in Western values.

Chester the Chimp
as Bear

Charlie & Sonia
as Bear
View All

Borat's cultural learning is revealing, even if it doesn't adequately convey how it benefits glorious nation of Kazakhstan.

The backlash just proves how deep a nerve the faux Kazakh journalist has hit.

The genius of Borat is all in Sacha Baron Cohen's daring, edgy, unrestrained performance.

Borat is a serious work of social criticism. But it's also the funniest movie I've ever seen.

The theory of comedy here is that you can get away with almost anything if you manage to make your target audience feel superior to the human beings being mocked on the screen.

I did find this to be one of the more inventive, aggressively offensive and insanely tasteless comedies in many a year. And yeah, that's a thumbs-up.

In the tactics of Cohen, Charles and their collaborators ... there is a level of social insularity, sneering and intellectual sadism that is positively disturbing.

Borat is funny, spleen-bursting funny, although you may catch yourself wondering if these are the kind of jokes you should be laughing at.

It wallows gleefully in its very un-PC humor, but that is part of what makes it work so well. Cohen and director Larry Charles make the unthinkable funny -- and in the process might just get you to think about racism, bigotry and sexism.

A gut-busting, uncompromising, totally outrageous film that takes the comedy of embarrassment to new, unprecedented levels.

Offensive? Yes, but I haven't laughed this hard since the Marx Brothers and Laurel and Hardy.

For better or for worse, Borat: Cultural Learnings of America for Make Benefit Glorious Nation of Kazakhstan is unique, an important movie, a multiplex comedy that doubles as a conceptual art epic.

Cohen gives a daring and terrific performance in this is hilarious mockumentary that is partly scripted, but mostly unscripted/ridiculous stunts that shock the people they involve. Borat is an edgy film that shows the real America, but in a laugh out loud, side splitting manner. This is a great film.

'Yagshemash!' The second film in the Cohen trilogy based on his original character creations that we all saw within his Ali G show. Now even though these characters are all very clever creations and work well within the BBC comedy, the films varied. Myself I always thought Ali G was his best and funniest creation offering killer satirical comedy, but the movie of that character turned out to be quite poor and not overly funny surprisingly. 'Bruno', his third film and final original character was easily the next best character offering outrageously embarrassing homosexual tomfoolery, the film also lived up to that brilliantly. Borat has always been somewhere in the middle for me, the character never really came across that funny on the Ali G show with the small sequences, I thought it slowed the show down. Of course his character is suppose to be simple, backwards, slow, dull, dated etc...that's part of the stinging gag that Eastern Europe is slightly primitive and centuries out of date (dare I say medieval? yes I dare). But working with this angle can also be risky as the jokes can be slow coming and childishly simple, Borat himself being on the same intelligence and life experience level as a child to a degree (when outside his native country). So it did come as a surprise when this film actually turned out to be very very good, very amusing, highly awkward to watch at times and totally beat Cohen's first foray into the movies in 'Ali G Indahouse'. The main change to the programme here is the fact the plot is strung together around individual sequences showing Cohen making an ass of himself in dreadful cringe-inducing situations. Unlike Ali G where the film was spun into a proper full blown story with actual characters that you didn't care about whilst ruining the background myth of Ali G at the same time. This film merely introduces a sidekick who directs Borat as he goes across America making a documentary for the benefit of his homeland Kazakhstan...oh and searching for Pamela Anderson. So just like the little sketches on the Ali G show we see Borat meeting various Americans, visiting various places of interest and generally showing himself up as the innocent wet behind the ears traveller who has no clue how to conduct himself in the modern western world. This film easily tops the TV show sketches for embarrassing moments, its like a car crash...you know the rest. Some of the things we see are just unbelievable, apart from much blatant racism against Jewish folk (Cohen's favourite), we meet a racist all American cowboy at a Texas rodeo who accuses Borat of looking like a terrorist down to his moustache. More racism in the South as Borat tries his hand at etiquette lessons (again) from some clearly well to do religious white folk, the funny twist being Borat's fat black hooker girlfriend turning up at the door. Full scale nudity of course, can't not have a bit of full scale public nudity (oh geez!), breaking stuff in a Confederate heritage museum (more obvious racial undertones) and finally assaulting Pamela Anderson in a Virgin Megastore (that shows the films age!). Being America it is too easy for Cohen, the targets are so obvious and so simple to set up...racism, all American jingoism and homophobia are always gonna be his weapons of mass embarrassment. He sets his sights on these and hits them spot on, be it an old person, a young person, a famous/political person or even a crowd, Cohen can tease xenophobia or discrimination out of anyone with his naive questions and general approach. While the film does feel more like an extended version of the TV sketches that was to be expected. It was also expected that whatever Cohen got up to here it would be bigger and bolder than ever before, that was certainly achieved. It starts off slow and ends kinda flat but unsurprisingly those are the sequences where Borat is a character within a films plot, its only when he ventures into the reality of everyday America that the film comes alive. Unfortunately the film is riddled with offensive moments which will and have upset many people which I can understand, unlike South Park the film isn't an animated cartoon so it feels more intense. To a degree you could say that all the commotion surrounding the film only goes to prove it did what it set out to do, Cohen hit the nail on the head. Most will know of this character and Cohen's antics from TV, you know what to expect and get what you pay for, if you don't like this guys brand of humour then you know not to see this, it will offend. Although I do wonder how some of these people carry on their regular lives after being somewhat exposed in this film, that is if they are not actors of course, its actually very hard to tell in my opinion but I'm sure some may be. After the disappointing Ali G flick Cohen pulls it back and produces a great slice of wince-inducing shameful humiliation that will leave you with a sheepish grin plastered across your red face. 'Dziekuje'

It's crude, offensive, satirical and emphatic in the funniest of ways. Sacha Baron Cohen is brilliant as Borat. This mockumentary of a cross-country trip around America from the eyes of a joyous tourist explores the truthful and boasting culture of American society. Borat: Cultural Learnings of America for Make Benefit Glorious Nation of Kazakhstan is a pushy film that is highlighted by the characterization of its main character and morality of the trek across a nation. 3.5/5

Disgusting. It isn't funny to be made to feel uncomfortable for other people for 83 minutes unless you have a serious personality flaw.