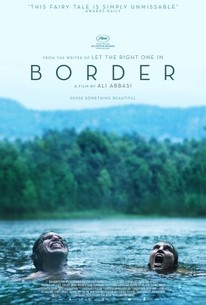 Customs officer Tina is known for her extraordinary sense of smell. It's almost as if she can sniff out the guilt on anyone hiding something. But when Vore, a suspicious-looking man, walks past her, her abilities are challenged for the first time ever. Tina can sense Vore is hiding something she can't identify. Even worse, she feels a strange attraction to him. As Tina develops a special bond with Vore and discovers his true identity, she also realizes the truth about herself. Tina, like Vore, does not belong to this world. Her entire existence has been one big lie and now she has to choose: keep living the lie or embrace Vore's terrifying revelations.

I found this compelling as I watched it, though I don't feel I gained much from the experience.

There are bits of everything in here: gender studies, fairytales, myth and sci-fi. It's profoundly preposterous, but delivered at all times with a deliciously straight face.

Here is a story that upturns all the usual questions, never mind the traditional or notional answers.

Beneath her layers of make-up and prosthetics, [Eva] Melander gives a fine and moving performance as the customs officer with the unlikely powers.

Border is without question one of the most rewarding cinematic experiences of 2018 and a film you absolutely, unequivocally will not forget about in the near future.

Unique format, out of the ordinary, and marvelously disturbing [Full Review in Spanish]

This is fantasy romance with a snarl of misanthropy and more bite than a vampire school reunion. It needs to be seen.

Wins over your heart as a 21st-century tonal poem that embraces the hybridity and plurality that radicalism seeks to thwart.

Border doesn't all fit together -- it even tries too hard to fall into place at points -- but its ambition matches its heart.

This Swedish film by Ali Abbasi proposes a heartbreaking radiograph on the human species. [Full review in Spanish]

SMELLS LIKE MEAN SPIRIT - My Review of BORDER (4 Stars) Nominated for Best Achievement in Makeup and Hairstyling at this past Academy Awards, BORDER slipped by me when initially released, but I caught up with it on YOUTUBE. From writer/director Ali Abbasi along with co-writers John Ajvide Lindqvist (LET THE RIGHT ONE IN) and Isabella EklÃ¶f, the film exceeded my already high expectations and may just be the most unsung film of 2018. Simultaneously the stuff of fairy tales and nightmares, BORDER takes a very David Lynchian concept and humanizes it far more than I thought possible. The filmmakers tell the story of Tina (Eva Melander), a Swedish border guard who resembles the distaff version of the GEICO Caveman. Known for her keen sense of smell, Tina has the uncanny ability to sniff out contraband or even guilty feelings. One day, Vore (Eero Milonoff) passes through and gets stopped. He looks cuts from the same cloth as Tina, and her fellow inspector reveals that Vore possesses some unexpected anatomy. Voreï¿ 1/2(TM)s attraction to Tina feels palpable, animalistic even. Thus begins their extremely unorthodox relationship. Around the same time, Tina exposes one traveler as a trafficker in child pornography. Her police boss, Agneta (a commanding and perfectly measured Ann Petrï¿ 1/2 (C)n) uses Tina to help locate the people at the center of this ring. How this may or may not relate to the central storyline reveals itself as the film unfolds. BORDER, while steeped in the grunge of dank forest locales and visceral sexuality, plays like a classic fable. To reveal anything more about where this story goes would spoil the experience, but suffice it to say, itï¿ 1/2(TM)s unforgettable. Itï¿ 1/2(TM)s a film about identity, about what it means to be human, and thematically would make a great double bill with Jonathan Glazerï¿ 1/2(TM)s 2013 mindbender, UNDER THE SKIN, which starred Scarlett Johansson as a mysterious person out of place on this earth. BORDER places its characters in increasingly heightened situations, forcing them to reveal their most base of instincts. Occasionally surreal, it still stays focused on every nuance emanating from Melanderï¿ 1/2(TM)s touching facial expressions. It doesnï¿ 1/2(TM)t matter how many pounds of makeup she and Milonoff find themselves under, these two actors bite into their roles with an almost operatic abandon and convey so much emotion. Filled with nudity, dirt, wetness, and powerful sexual tension, Abbasi fills the screen with an array of memorable images. Think ERASERHEAD meets THE EMERALD FOREST for starters. With spare dialogue, it almost plays out like a silent film, communicating so much with the slightest sniff of a nose or baring of teeth. BORDER upends gender and morality in its search for our characters to truly be who they are inherently. Tina, who prior to meeting Vole, lived a quiet existence with her benign but distant boyfriend Roland (JÃ¶rgen Thorsson). Stuck in their relationship rut, her life consists of work, dull nights at home, and the occasional visit with her Dad, who suffers from dementia and stays at an assisted living facility. Vole upends her entire world and changes the dynamics in all of her pre-existing relationships. Burning with charisma, Vole would be a Manson-esque cult leader in another story. Here, heï¿ 1/2(TM)s rife with possibilities both sweet and exceedingly nefarious. For those seeking a little adventure in their filmgoing experience, BORDER gorgeously fills that bill. Some imagery may be disturbing to some, but it presents almost everything as perfectly natural. Go for the intense growling and stay for the underlying gentleness. BORDER has sharp teeth and a warm heart.

Despite dragging a bit towards the end, this is an atypical fantastic romance that can be more bizarre and shocking than one would imagine - and Eva Melander and Eero Milonoff are phenomenal under tons of incredible makeup that almost made me believe their characters were real.

Border is a hard movie to describe without giving away key parts of its plot. Ostensibly this Swedish film is about Tina, a customs agent with a genetic deformity who can literally smell fear. She's bedeviled by another man, Vore, who looks to have the same genetic deformity she has, which unleashes a flurry of gnawing questions over whether the two have some deeper connection, who might be her real family, and whether this genetic deformity is really what she's been lead to believe. The movie is from the writer of Let the Right One In and takes a very macabre and understated look into a fairy tale realm bleeding into our own world. The movie is mostly grounded and benefits greatly from its lead actress, Eva Melander, who gives a rousing, nuanced performance under heavy prosthetic makeup. Tonally, it feels like the darker impulses, which can get extremely disturbing, are at odds with some of the other competing storylines, like her gradual self-awakening and the potential romance with Vore. Nothing will prepare you for how weird things will get including an awkward sex scene that defies belief. Border holds out a bit too long with its pertinent information, delaying the mystery without enough clues to tease things out in a satisfying manner. Afterwards, the remaining reveals reflect more on the cruel depths of Vore and less with Tina's response. It makes an uncomfortable direction feel like it's meant more as provocation. Ultimately I think I needed more from the story and characters to better meet out the aims of its genre-defying vision. It's definitely a different movie and will register for those looking for dark, adult fairy tales. Nate's Grade: B-